You Say Grenache, I Say Garnacha: A Toast to #GrenacheDay

“Grenache is for me, the wild, wild woman of wine, the sex on wheels and devil take the hindmost, the don’t say I didn’t warn you.”  –  Oz Clarke

I rather like Oz’s description of Grenache, the wine grape of many personalities.  Having spent a bit of time in Spain, I myself have fallen prey to her charms:  sometimes in the magenta-hued guise of a flirty Rosado, as I dined on fresh-grilled sardines; other times cloaked in the dense blackberry velvet of Priorat, where she embodied elegant perfection with seared lamb chops.  I can remember a winter meal with dear friends, when we shared stories by the fire, over cassoulet and a glass or three of Châteauneuf-du-Pape.  Whichever Grenache avatar you prefer, the truth is simple:  this grape gets under your skin.

Where Did It Come From?

Until recently, researchers believed that Grenache originated in Spain (where it is known as Garnacha), along the eastern coast of the Mediterranean.  There is still much evidence to support this theory, including the fact that all three color variations of the grape have been documented here.  And ampelographers (scientists who research grape pedigrees and genetic relationships) have found significant evidence of clonal diversity among current plantings of Spanish Garnacha.  However, historians in Italy have proffered a different explanation.  They posit that Grenache actually comes from Sardegna, the island off the west coast of Italy.  Cannonau di Sardegna, as it is known there, makes earthy varietal wines often boasting alcohol levels of 15% or higher.

Which version holds sway?  It’s a tough question.  Throughout history there has been much crossover between Spain and Sardegna, both culturally and commercially.  By 800 BC Sardinians had put down roots in southern Iberia, giving rise to the possibility that it was they who brought the grape to Spain.  On the flip side, Sardegna eventually became a Spanish colony in 1479, and remained one for almost 250 years.  Maybe the Spanish brought Garnacha seedlings with them when they conquered the island.  Who knows?  And who really cares?  I’m just glad I get to enjoy a glass of it now and again.

Leaving aside the Spanish-Sardinian debate, there is another place where Grenache has made a comfortable home for itself – the south of France.  It is the principal grape in the storied blends of Châteauneuf-du-Pape, where it makes powerful wines with tremendous ageability.  It also dominates the blends of nearby Gigondas and Vacqueyras and serves as a reliable blending partner with Syrah and Mourvèdre, in the wines of Côtes du Rhône.  Australia boasts some of the oldest Grenache vines in the world, testament to its long history with the grape.  Unfortunately many of those bush-trained vines were uprooted in the 1980s, during the rush to convert vineyards to international varieties like Cabernet Sauvignon and Merlot.  But lately there has been renewed interest in Grenache, with growers looking to coax the highest quality out of the vines that remain.  At the 2015 Conference of the Society of Wine Educators, I had the good fortune to attend a day-long seminar on Australian wine.  We participated in a tasting of wines made from Old Vines Grenache, all of which were powerful, elegant, and tantalizingly complex.

Stateside, varietal Grenache wines can be found in California (Paso Robles, Dry Creek, and Sierra Foothills) and in Washington.  You might be able to track down a bottle or two from producers like Ridge, Sine Qua Non, Tablas Creek, or McCrae Cellars.  Most of these wines are crafted by aficionados of Rhône-style wines, so if you consider yourself a Rhône Ranger, get some. 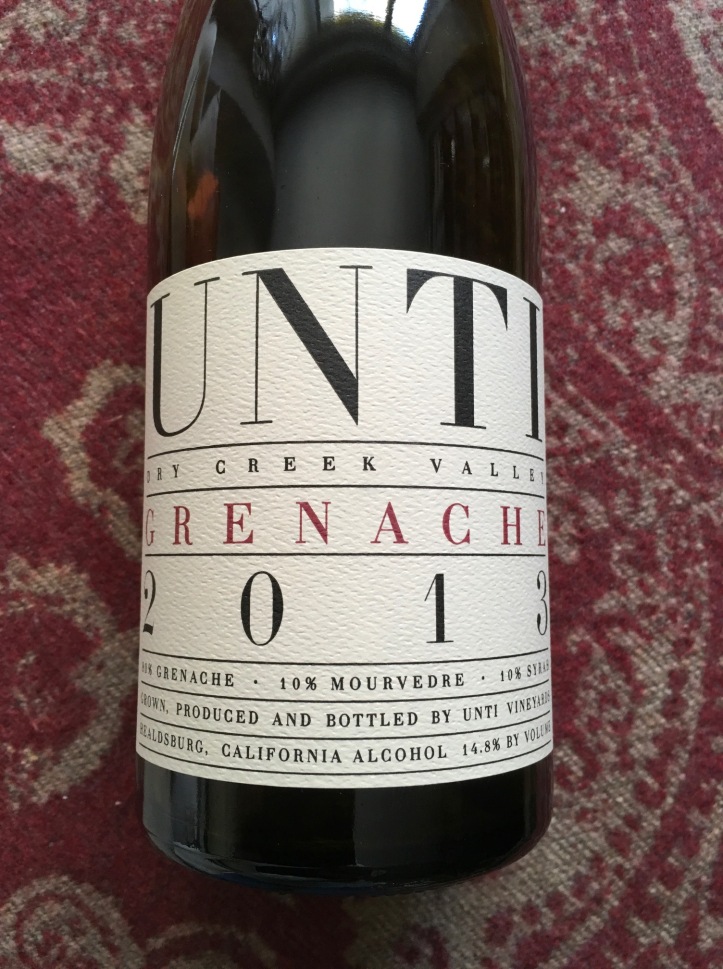 This wine is made of 80% Grenache, and 10% each of Syrah and Mourvèdre, selected from vineyards planted over 35 acres. The Grenache comes from a 2.9 acre parcel planted to three clones from Châteauneuf-du-Pape, giving rise to a wine that is darker and more concentrated than many California Grenaches. Aggressive thinning of the leaves during the growing season reduces the potential crop 40-50%, allowing the Grenache grapes to concentrate aromas and flavors that ultimately grace the finished blend.

2013 was a very dry vintage, resulting in smaller berries and a more structured wine, One third of the grapes were fermented using whole clusters, and the finished wine was aged for seven months in 620 gallon French oak foudres. There was no fining or filtration. Just 980 cases were produced.

Color: Deep purple, all the way to the edge.

Nose: Cherry and strawberry from the Grenache, but with inky, earthy notes from the other two grapes.

Palate: Red and black fruit – ripe but not jammy, kept honest by the tannic structure provided by the Syrah. There’s a savory element, and a touch of rosemary.

Verdict: A powerful wine that will please aficionados of both the Northern and Southern Rhone. I preferred it with food, and a bistecca alla fiorentina would be the perfect accompaniment. 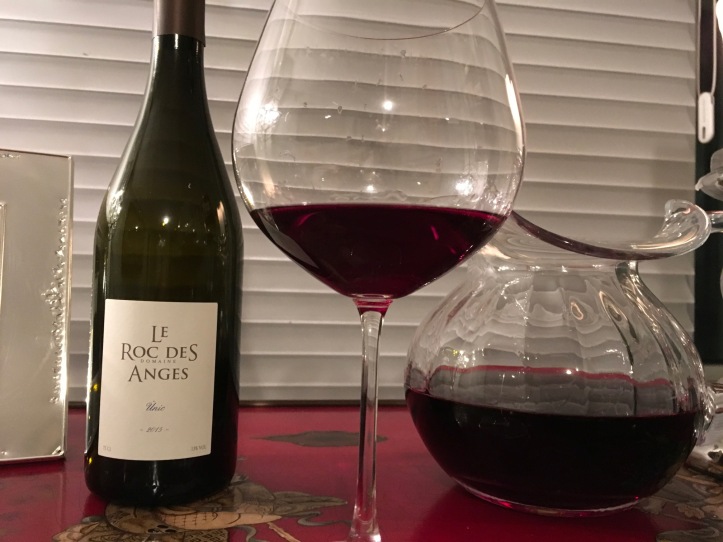 Part of Marjorie Gallet’s small operation near Perpignan, this 100% Grenache wine comes from grapes farmed according to organic and biodynamic principles. The domaine’s name comes from the unique soil here, black schist with ribbons of white quartz (the angels) running through it. Ùnic is one of three wines that Gallet considers her current “experiments” in matching grapes with the right soils and concocting the best blends of the varieties she plants. And, by the way, she makes a killer Carignan made from 100+ year-old vines!

Color: Compared to the Unti, this wine is pale. Same purple color but much less intense.

Nose: Pronounced aromas of cherry and strawberry that call to mind a freshly-baked pie. Underneath there are some dusty notes,

Palate: More cherry-berry goodness, framed by silky tannins and enough acidity to keep things fresh. After opening, there are some earthy and herbal notes that make for a well-rounded tasting experience.

Verdict: It’s much lighter in body than I expected – and I mean that in a good way! It’s fresh but full of heart – I like that in my Grenache! This would be great on its own but it went swimmingly with a simple grilled rib-eye and salad. It sang with the blueberry-pomegranate vinaigrette that dressed the salad. Quite a surpise! 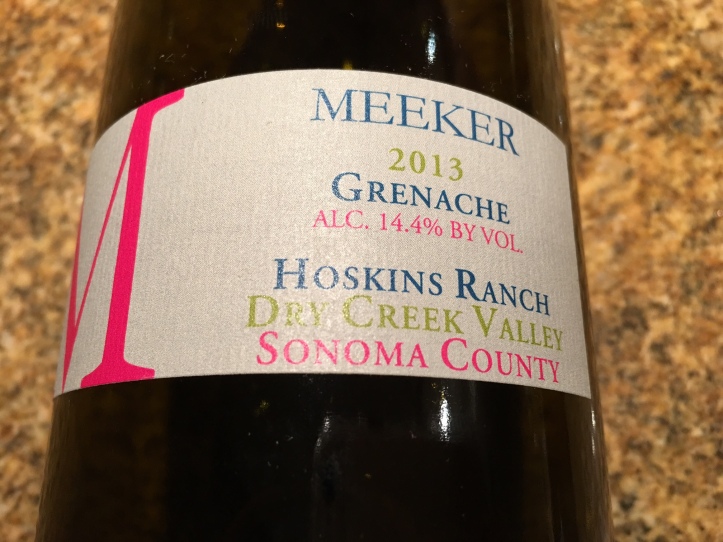 Grenache is a vigorous vine and, left to her own devices, she will produce quite a large crop of grapes that often lead to a fruity but uninspiring wine. To prevent high yields, Harold Hoskins, who farms this tiny parcel where the Dry Creek and Russian River meet, carefully limits yields. His workers make three successive passes through the vineyard, dropping more than half the initial crop (a process known as green harvesting.) The vine’s energy is then channeled to the remaining grapes, enabling full phenolic development and enhancing complexity. In the winery, the ripe grapes undergo a 17-day cold fermentation and are aged for 22 months in a mixture of neutral and once-used oak, some of which is American, some French.

Color: This Grenache is a gorgeous pink-ruby color, reminding me more of candy than wine.

Palate: A sip brings effusive cherry fruit underpinned by a framework of acidity and barely-there tannins that just catch the back of my throat.

Verdict: When I remind myself that this wine clocks in at 14.4% abv, I wonder how that can be: it’s light on its feet and refreshing, making me reach for the glass again and again. I’m a lover of Grenache but, let’s face it, many versions are little more than cherry fruit bombs with enough alcohol to make you tipsy (nothing wrong with that, by the way.) This one is refined, balanced, and elegant: it’s voluptuous but reined in; exuberant but a little reserved. The Meeker Grenache is essentially a vinous contradiction that is very alluring, indeed.