Caches of Coins, Hanging Houses, and Bottles of Bobal: It Must Be #Vuelta2017 Stage 7

Let’s hope the riders are well-hydrated before they hop on their bikes for Friday’s stage: they’ll have a long, hot day of cycling ahead of them. Stage 7 is the longest of this year’s race, and it takes the peloton inland, away from the cool coastal breezes, toward the Saharan conditions of Spain’s Meseta. Other than that, it should be a fairly “normal” day in the saddle.

Our departure point is the Mediterranean city of Llíria, formerly a Roman administrative center with ruins aplenty for the amateur archaeologists among us. Within the boundaries of the old town one can explore what’s left of temples, baths, and monuments dating to the 1st century. Llíria’s biggest claim to fame, however, is its collection of ancient coins now housed at the University of Valencia Historical Library.

Back in 1806, during renovations to the San Miguel de Llíria Sanctuary, workers stumbled upon an enormous cache (10,000+) of Roman silver coins known as denarii. Scholars estimate they were minted between 214 and 43 BC. Mixed in with the Roman currency were medallions and other metalwork attributed to the Valencian, Roman, Arab, and Spanish-Christian cultures.

By the time the riders approach the finish in Cuenca, they will have traveled 207 kilometers. With local temperatures edging upwards of 100 degrees in summer, I’m sure they will be looking for fresh air, fresh water, and fresh shirts! My recommendation? Perhaps they should visit one of the city’s Hanging Houses (Casas Colgadas) perched along the ravine.

Cuenca itself sits at the juncture of the Júcar and Huécar Rivers, a veritable oasis carved out of the mountains. The city’s name comes from the Arabic word kunka, or fortress, and gives us a picture of what the original, walled city must have looked like. As for the Hanging Houses, no one really knows their origin, just that they appear to have been constructed in the 15th century. Over the years, they’ve been restored and maintained, and used as municipal offices, private homes, restaurants, and museums. The Museo de Arte Abstracto Español has occupied one of them since 1966.

The Wines of Utiel-Requena

For many years a source of inexpensive bulk wines, Utiel-Requena has turned over a new leaf with respect to quality. Situated between the massive La Mancha wine region and the other, more easterly Valencia DOs, vineyards here have the benefit of a bit of altitude, which moderates the effects of the severe continental climate.

Bobal is the red grape of choice, and it is well-suited to the red clay soils and high heat of the region. A drought-resistant variety, it thrives in the searing heat, and is usually grown on unirrigated bush-trained vines. As a varietal wine from low-yielding, old vines, Bobal can give rise to wines of intense color and character, with a powerful tannic structure. They are full-bodied wines aromatic of red fruit and spice, and maintain their acidity surprisingly well.

Vicente Gandia, now the largest winery in Valencia, opened its doors in 1885. Today it makes wine all over Spain and has a healthy export business to the United States and elsewhere. But, with its roots in Utiel-Requena, Gandia has crafted a 100% Bobal wine reflecting the winery’s heritage. It was first created in celebration of Vicente Gandia’s 125th anniversary. 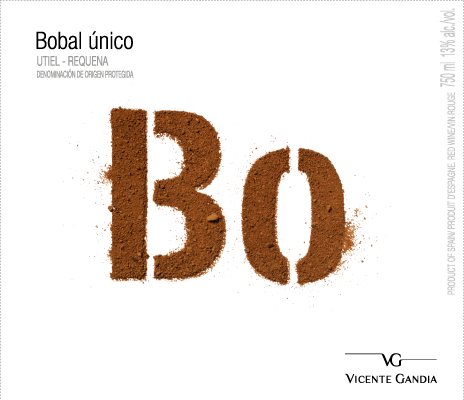 Bobal grapes macerate for 15 days on their skins and are fermented in temperature-controlled, stainless steel tanks. The finished wine (13.5% abv) ages for nine months in new French oak. Color is a deep, purple-red; very intense. Aromas of cherry, plum, vanilla, and toast wrap around an earthy, dusty component. Flavors of red fruit and something savory – grilled meat perhaps – are kept in order by chewy tannins and bright acidity. Not bad!

I’ll be back tomorrow with your wine recommendation for Saturday. On Stage Eight we head east again, this time toward the budget-friendly regions of Jumilla and Yecla. Get ready for some Monastrell (aka Mourvèdre)!