From the Mountains to the Sea: #Vuelta2017 Heads Southeast to Catalonia on Stage Four

After the Pyrénéean punishment inflicted on them during Monday’s stage, the riders will certainly appreciate a relatively flat course, with rolling hills and just one categorized climb. We could even joke that it is a day at the beach, since that’s where the peloton will cross the finish line. Descending from the Andorran slopes to the Mediterranean coast, Tuesday’s route winds up in Spain’s storied Costa Brava, a place that, while technically Spanish, gives more than an occasional nod to the culture of neighboring France.

Wine claims a prominent place in the culture here in Catalonia, a fiercely independent region anchored by Barcelona, its largest city. It has always been an important economic engine, thanks to its bustling ports that have supported sea trade for some 3,000 years. This economic leverage enabled Catalonia to acquire political and military power as well, allowing it to accumulate significant wealth.

But its healthy coffers and agreeable seaside setting also made Catalonia a popular target for invading tribes, from the Greeks in 6th century BC, to the Carthaginians, Romans, and the Moors. After nearly 300 years of domination by foreign armies, Catalonian citizens threw their lot in with Charlemagne and the Franks, who promised to drive the Moors back to the southern provinces. Instead of returning Catalonia to home rule, Charlemagne incorporated it into the Frankish empire. It remained so until the 9th century AD, when the Counts of Barcelona seized back control of the region, leading to several hundred years of prosperity.

The Wines of Catalonia

Winemaking in this corner of Spain very much reflects the independent nature of its citizens. Almost every style of wine is made here, and from an impressive number of grape varieties. From one town to the next, the wines on offer vary; a wine lover day-tripping around the vineyards of Catalonia will never be bored. From the rich Cariñena-based reds of Priorat, to the light and refreshing Cavas of Penedès, there is much to discover. Let’s take a brief trip to Empordà, tucked up against the border with France, in Spain’s far, northeastern corner.

Part of the wild, unspoiled coastline stretching from the French border down to Barcelona, the Costa Brava is speckled with small fishing towns that seem to have hardly changed in centuries. If you’re looking for a remedy to the crowded playas of Andalucía, here it is: beaches bump up against nature preserves, vineyards run almost to the sand dunes, and wildlife abounds. Oh, yes, and there’s good wine!

The winegrowing region of Empordà centers on the town of Figueres, home to the Salvador Dalí museum, and enjoys a Mediterranean climate that is moderated somewhat by the Tramontana wind blowing down from the Pyrénées. That breeze keeps the vines cooler and drier than they’d otherwise be, an important consideration in pest and disease management. It also enables growers to maintain sustainable organic or biodynamic regimens relatively easily. To ensure the vines aren’t subject to too much of a good thing, vines are usually staked to protect them from more violent gusts. 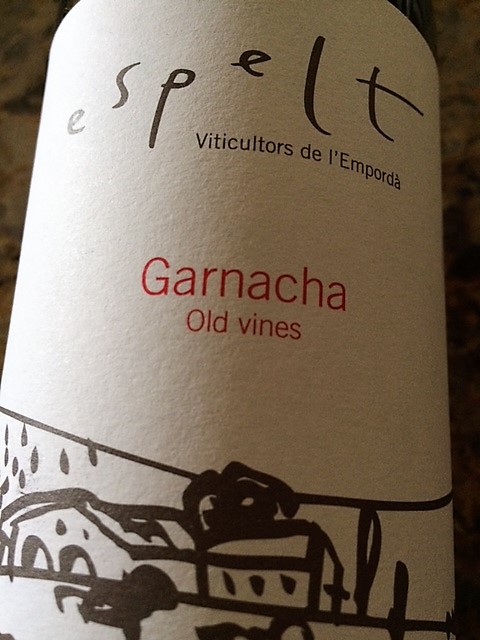 The Espelt family has grown grapes in Empordà for centuries but didn’t bottle their own wines until 2000. Now managed by Anna Espelt, the estate has been certified organic by ECOCERT, and focuses its plantings on indigenous varieties, making traditional styles of wine. Grapes for this wine come from the Rabós vineyard, situated on slopes 250 meters high on soils of sandy granite, limestone, and slate. It lies within the Albera Nature Reserve, just a few kilometers from the sea.

The Garnacha vines are nearly 100 years old, and give rise to grapes with a complex, concentrated fruit profile, as well as a distinctive mineral component. Grapes are hand-harvested, destemmed, and crushed before spending 36 hours in a pre-fermentation maceration. Alcoholic fermentation occurs in stainless steel tanks, and the finished wine spends three months in new French oak barrels.

Tasting note: Deep ruby red color – so vibrant! On the nose there are bright cherry notes, along with some dirt and herbs – thyme and rosemary – and a whisper of vanilla. The palate is complex, especially for a wine at this price point. There are loads of red fruit tempered by earthy notes and more acidity than I expected. And there is a minerally ribbon that slices right through the center. A very lovely wine, one I’d be happy to sip again.

Familia Espelt also makes a white wine from old vines Garnacha Blanco, a Rosado from Garnacha Negra, a varietal Cariñena, and a sweet, fortified wine aged in the solera system. For more information on where to purchase these wines in the United States, visit the European Cellars website.

Enjoy Tuesday´s picturesque route along the Mediterranean and get ready for Stage Five on Wednesday. It´s another mountainous stage, what the Spanish call rompepiernas, or leg-breaking. Should be fun for us, though. Until then, Viva La Vuelta! ¡Salúd!