Perseverance and Passion: The Story of Ordaz Family Wines 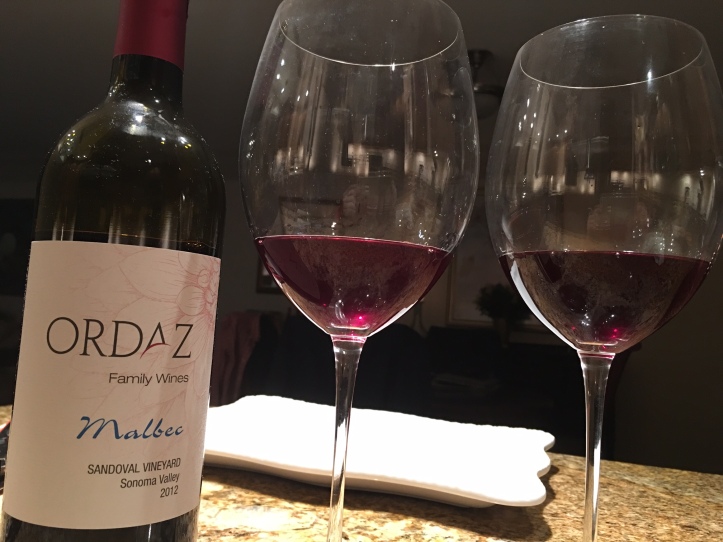 How often do we get the chance to look right into the heart of a thing we love?  An opportunity to see beyond the polished surface to its core; to observe the essence of it, the skeleton and sinew that hold it all together?  Participants in February’s #WineStudio did just that, thanks to a two-week engagement with Ordaz Family Wines in Sonoma Valley.  Yes, we learned about the single-vineyard wines and the challenges of farming such small parcels of land; and yes, we sampled two wines that made us check our latent preconceptions about Sonoma.  But the real beauty of this seminar came in the form of a history lesson.

Back in the 1970s, Jesus (Chuy) Ordaz, left his family fruit stand in Michoacán, Mexico,  to pursue better employment options in California.  Upon hearing that farm workers could earn decent wages pruning trees there, Chuy and his younger brother José made their plans:  they would look for the first chance to sneak across the bridge in Tijuana, then make their way north.  As with most plans, this one didn’t go as expected, with José successfully avoiding border authorities and Chuy being apprehended and sent back home.  Hardly a shocking turn of events, as this very scenario plays itself out thousands of times every day, in a hundred other places.  But Chuy Ordaz was no ordinary guy.

He tried, and tried again.  Thirty-three times.  By the time he made it to California, he had developed an amicable relationship with the border agents who, at that point, had gotten to know him.  Chuy traveled north, eventually finding work as a day-laborer at Korbel Cellars, chopping wood.  Always on the look-out for the next opportunity, Chuy soon moved on to Kenwood Winery, where he worked with other migrants picking grapes.  Most, like Chuy, had come from Mexico.  But unlike him, they spoke no English, a fact that limited their ability to communicate or negotiate with their employers.  When the pickers requested a modest raise of $2 per ton of grapes picked, Chuy organized a peaceful (and successful) strike to drive home the importance of pickers to a successful harvest.  Management immediately promoted him to foreman of the crew.

In the 1980s, Chuy led another fight – the one for organic farming – way before such causes were fashionable.  His belief that a good crew could protect the vineyards better than pesticides would underlies the sustainable farming methods championed around the world today.  But it wasn’t just the vines that Chuy worried about:  he also feared the long-term effect on his men of daily exposure to deadly chemicals.  He was truly a man of principle, putting his beliefs into action.

By the time the 1990s rolled around, times were changing in wine country.  Kenwood Winery was sold and Chuy, not wanting to leave his fate in the hands of new management, proceeded to get his farm labor contracting license.  That was the genesis for Palo Alto Vineyard Management Company, a crew of 40 workers who went to work in local wineries.  Many of those workers stayed with Chuy for years; a couple of them still work for him today.

Still, Chuy wanted more, dreaming of the day he would own land and produce wines made from his own grapes.  A first step to that goal was founding Ordaz Family Wines, with his two sons, Chuy Jr. and Epifanio (Eppie).  While they don’t own their own vineyards yet, they craft wines made from grapes grown in places very familiar to the crew; in some cases farms they work every day.  These wines are single-vineyard expressions of familiar Sonoma grapes like Pinot Noir, and some less familiar ones like Malbec.

Eppie, who graciously participated in our #WineStudio discussions, is now the winemaker for the venture, and he explained some of the finer points of the wines we tasted.  (Both wines were provided to me courtesy of the winery, without any requirement that I write about them.  The opinions that follow are mine alone!)

Named after the family matriarch and her youngest grand-daughter, the Placida Vineyard was planted in 2003 and spans just 9 acres.  It sits atop a ribbon of special soil in the Russian River Valley known as Gold Ridge, a reference to the yellow clay and sand soil that locals revere so much that finding it is called, “striking gold.”  The wine is aged in French oak, 30% of which is first-use, for 9-10 months.

My thoughts?  The Placida Pinot Noir is a gorgeous ruby red, fading to pale violet at the edges.  On the nose I get a big whiff of red fruit – cherry, strawberry, raspberry – with pleasant hints of vanilla and cocoa powder.  Compared to the many Pinots from Russian River Valley I’ve had, this one is a little restrained on the nose.  It leaves something to the imagination!  A sip brings ripe red fruit that, again, seems understated but leaves me wanting another taste.  The balance between fruit and acidity makes for a stunning wine, one with a very Bearable Lightness of Being (my apologies to Milan Kundera.)  There’s an elegant dance happening with all the elements of this Pinot, especially when you consider the price point.  An under-$40 bottle of Pinot Noir that over-delivers in every way, in my opinion.

A tiny parcel of two acres (!) the Sandoval Vineyard was specially selected for Malbec, which thrives in the rocky clay soils on this part of Sonoma Mountain.  Malbec is a bit of an outlier here, known mostly for its role in Bordeaux-style blends with Cabernet Sauvignon and Merlot.  Eppie feels strongly that Sonoma can turn out world-class, varietal Malbec wines and, based on what I experienced in this tasting, I agree.  Maybe Malbec will be the Next Big Thing in Sonoma.

This wine is as dark and deep as the Pinot was light.  It’s dense purple-violet, all the way to the rim and offers up enticing aromas of plum, black cherry, and mocha.  On the palate, there’s all that and more, with the black fruit accentuated by a nice belt of forest floor and maybe some smoke.  The 18 months in French Oak have left a lingering trace on both the aromas and flavors without clamoring for attention.  And I guess that’s the point:  there is an elegance and lightness about this wine that sticks with me.  At 13.5% abv, it weighs in more like a Malbec from Cahors than one from Mendoza, yet it has such exuberant fruit that it makes you wonder.  Perhaps that’s its charm – it is its own thing all together.  With just 135 cases produced, anyone who wants to sample it had better move quickly!

In addition to the wines we sampled, Ordaz Family Wines also makes a two single-vineyard Zinfandels (Maus and Montecillo) and a Montecillo Vineyard Cabernet Sauvignon.  All of their wines are available for purchase through the company website. 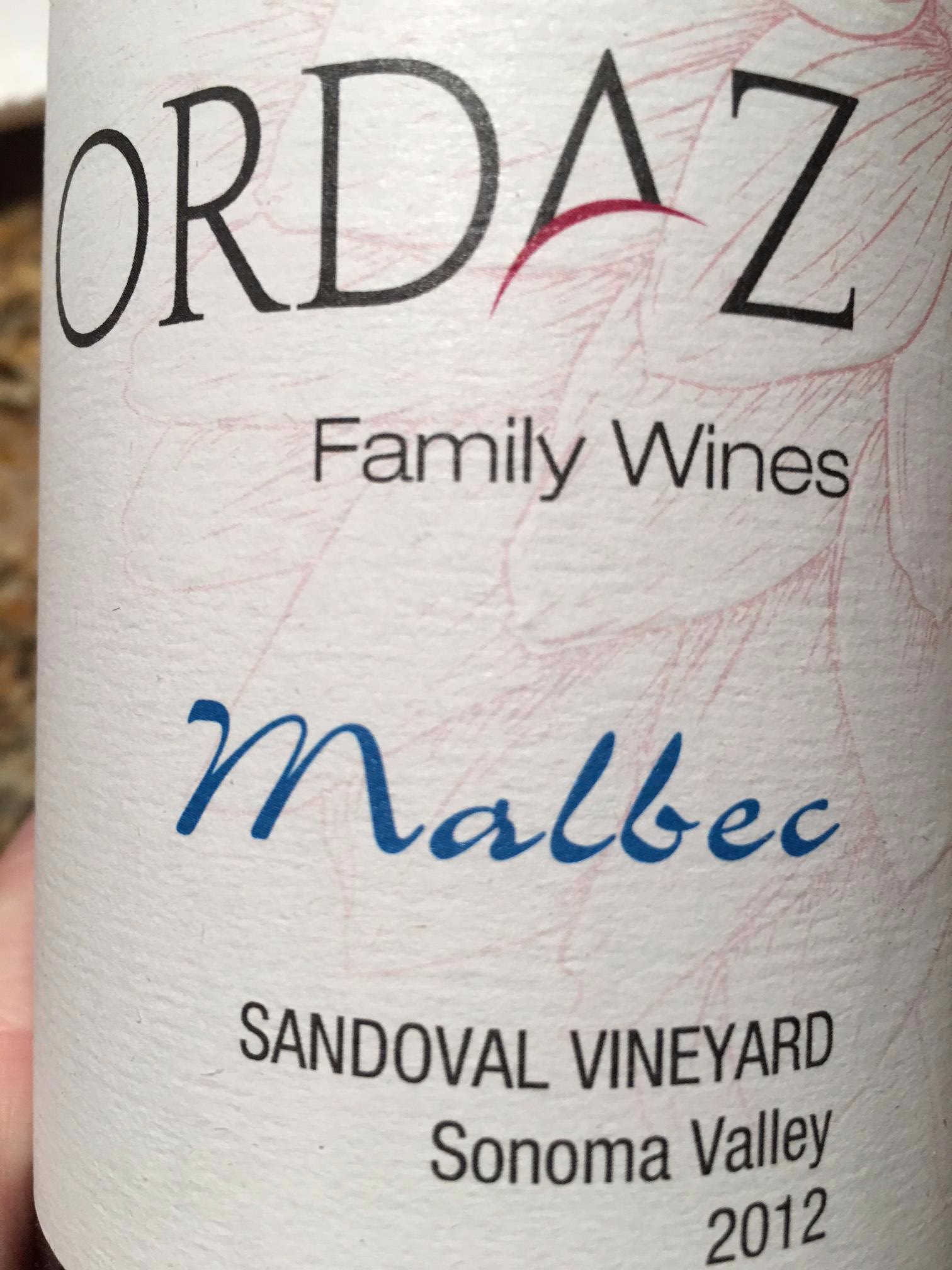 Clearly the Ordaz family has one goal above all others – to make wine crafted from grapes grown on their own land.  But over the years, Chuy and his sons have learned other lessons that drive them forward.  During our chat, Eppie shared his wine-making ethos:

I’m not looking to be a giant label that produces a homogenized product.

He prefers producing exceptional wines; ones that reflect the unique characteristics of the tiny plots where the grapes are farmed.  Each year, weather conditions differ from one vineyard to the next.  Rather than relying on blends to make the best of challenging circumstances, Eppie chooses to embrace the unique qualities of each parcel, taking what Nature gives him and crafting wines that are true to their roots.

When quizzed about what might be on the horizon for Ordaz Family Wines, Eppie offers up a couple of ideas, which are music to a wine-lover’s ear:  a Chardonnay from 44-year-old vines, and a Bordeaux-style blend comprising Cabernet Sauvignon, Cabernet Franc, and Merlot, an homage to some of the wines his father helped make back in the 1970s and 1980s.  I can only imagine the delights such wines would bring.

After learning about the Ordaz family history and tasting two of their wines, I find myself rooting for them to plant their family’s flag on a vineyard of their own.  When you think about Chuy’s unwavering dedication to realizing his dream, his concern for both the vines and the workers who tend them, and the love of country and family that he has instilled in his sons, how can you not?  What they have already accomplished is stunning in magnitude and simplicity:  it is the perfect marriage of perseverance and passion.

It’s soup weather in the 305 and I couldn’t be more thrilled. I do feel (a little) bad for the tourists wishing for balmy beach time.
A variation on my favorite farro salad included strips of balsamic-glazed portobello mushrooms on top. So easy and delicious!
Some nights you just need Sangiovese, am I right? Paired with an excellent vitello alla Milanese from @perricones here in Miami, the Testamatta (crazy head) from @bibigraetz in Tuscany was perfect.
New @delta terminal at LGA is superb! The transformation is unbelievable, especially when you consider the old terminal functioned throughout the massive construction process. Smooth sailing all the way through!
Happy 2023 everyone! Wishing you all good health, good friends, and (of course) good wine in the coming year. Feeling grateful, letting go of the challenges of 2022 and opening my heart to the potential of 2023. Cheers to all the good things! 🥂
Delightful anniversary dinner last night at @bardeasteak - mini Cuban sandwiches made with wild boar and served in a wood cigar box; elk meatballs in a lovely sauce; a wagyu tartare. And that was just the appetizers!