When I first saw the topic for September’s Monthly Wine Writing Challenge, my mind went immediately to the obvious:  Champagne and the other sparkling wines that we break out for celebrations, big and small.  But, I thought, that won’t be too original.  Come up with something – anything – else.  So I sat and thought about it for a while, letting my mind wander wherever it wanted.  Maybe inspiration would strike, and something eloquent and unique would flow from my pen.

What does “bubble” mean?  For someone who lives in South Florida, Las Vegas, or Arizona, the word is likely to evoke memories of the 2008 recession, when real estate values in those markets took a beating, and many people lost the equity they had built up in their homes or, perhaps, even the homes, themselves.  (Have you seen last year’s hit, “The Big Short?”)  While the economy in general has improved since then, lots of folks are still feeling the after-effects, struggling to complete short sales or to restructure loans.  The memories linger.


In my neighborhood just north of Fort Lauderdale, there are signs that we’ve moved past the heartaches and headaches.   New projects sprout up, especially near the beach, promising more condos, more tax revenue and, inevitably, more traffic.  Those of us who’ve been here a while raise a skeptical eyebrow, trying not to be cynical, telling ourselves that this spurt of development isn’t a replay of 2006; that the growth is real, sustainable, and all those projects will come to fruition.  But we worry.  Construction cranes, traditionally a sign of economic prosperity, mean something else to us here:  a warning not to build too much, too fast, not to overestimate the strength of the market.  For if we build it, they may not come . . . .

Rumors of another housing bubble circulate around Miami, where the skyline has become much more crowded in the past couple of years.  The wealthy Brazilians and Chinese who scooped up apartments left and right, now have big problems of their own.  Talk of a glut of residential units coming on the market scares everyone.  We’re not quite Miami, but still.  The fear is real.

A dubious benefit of living where I do, is that I get to see about five hours of political ads every day (only a slight exaggeration.)  Florida is a swing state, maybe THE swing state in the 2016 presidential election, and, as such, we’ve been exposed to an avalanche of attack ads.  It sucks the life out of you.  While I strongly believe each of us must become informed on the issues and vote accordingly, this election cycle has been exhausting.  (and we have two months to go!)  There seems to be no respite from the hateful speech spewed by one side toward the other, then back again.  I honestly can’t remember a time it was so unrelentingly horrid.  The prominence of social media has allowed people to hunker down in their own political bubbles, crushing any possibility of civil discourse among those whose opinions differ.  We’ve become so ugly toward one another that it’s unbearable.  Yes, just another unpleasant manifestation of the word bubble.  <Sigh.>

As I continue to ponder this month’s #MWWC27 topic, I feel sad and disheartened.  “Bubble, bubble, toil and trouble,” which I seem to remember from some Halloween story or other, floats through my head.  The world sure seems to be experiencing a lot of both at the moment.  Curious, I look up the quote and find that it’s from Act 4, Scene 1 of Shakespeare’s Macbeth, and the exact wording is different.  Here it is, from the Song of the Witches: 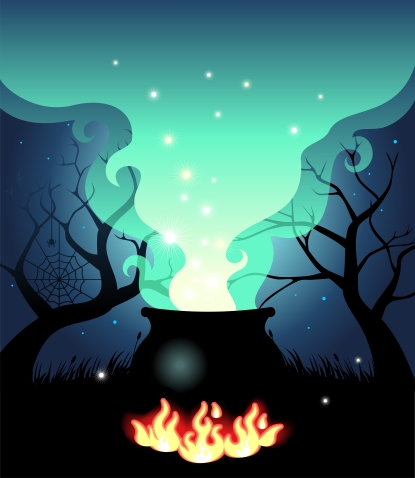 Fillet of a fenny snake,
In the caldron boil and bake;
Eye of newt and toe of frog,
Wool of bat and tongue of dog,
Adder’s fork and blind-worm’s sting,
Lizard’s leg and howlet’s wing,
For a charm of powerful trouble,
Like a hell-broth boil and bubble.

Double, double toil and trouble;
Fire burn and caldron bubble.
Cool it with a baboon’s blood,
Then the charm is firm and good.

Kind of sums up how I’m feeling about bubbles right now – rather pessimistic.  Maybe I should brew a concoction of my own.  What I really need is a tub full of bubbles into which I will close my eyes, submerge, and chant, “Calgon, take me away!”  (Or, if you’re a Seinfeld fan, you can channel Mr. Costanza and belt out, “Serenity Now!)

So, trooper that I am, I’m going to give the word “bubble” one last shot:  Let’s see if I can go way deep and extract something positive, without falling back on the sparkling wine cliché.  A connotation of the word that makes me smile and gives me hope for the future.  Wait – I think I’ve found something!  Back in April, as I sat on the balcony with a glass of rosé, I noticed a big commotion on the beach across the street.  Police, emergency crew, rubberneckers, all crowding around some strange plastic contraption on the sand, just above the tide line.  It was a transparent sphere, about six feet in diameter, and there was a man inside!  Turns out he was an extreme athlete who planned to propel himself in the plastic bubble all the way from Florida to Bermuda.  Reza Baluchi planned to spend five months traveling in his bubble to “raise money for children in need and to inspire those that have lost hope for a better future.”

Spoiler Alert:  he didn’t get very far.  The Coast Guard picked him up shortly after he departed, charging him with violating an order to abort his trip.  Baluchi had planned to travel 1,033 miles from Pompano Beach to Bermuda, then to Puerto Rico, Haiti and Cuba before heading back to Florida.  He had attempted the trip once before, back in 2014, when a HC-130 airplane and MH-60 helicopter, along with the vessel Maersk Montana, were eventually sent to rescue him, about 70 nautical miles east of St. Augustine. Estimated cost to U.S. taxpayers?  $144,000.00

Yeah, it was a stupid idea, and I’m not fond of anyone who practices his preferred brand of stupidity at taxpayer expense.  But this story made me smile at the sheer folly of it all.  That this man had a wacky idea and went for it, knowing he’d be arrested, certain he’d become a reliable punchline for late-night comics.  Stories like this one are why people call my adopted home state, “Flori-duh.”  And it reminds me that, amid all the gravely serious issues surrounding us, we’ve got to take levity and frivolity where we find them, appreciating every moment that elicits a smile from us.  For now, I will take solace in the ridiculous tale of the Ironman in the Plastic Bubble, knowing that his story will soon be supplanted by one that is far more absurd, and 100% guaranteed to originate in Florida.  While I’m at it, I think I’ll give in to the cliché and pour myself a glass of Champagne, silently thanking the local idiots for the much-needed comic relief.  Bubbles all around!