Paradise Rescued:  From Cabbage Patch to Cabernet Franc – A Review 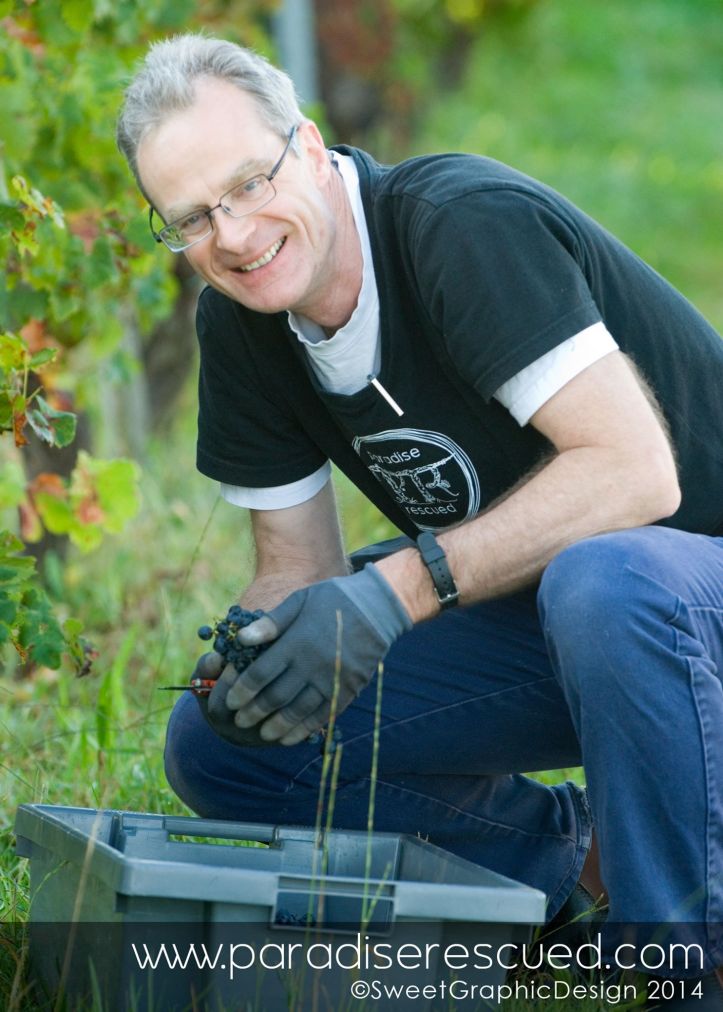 Have you ever dreamed of owning a vineyard in France?  Of working the fields and tending the vines, the fruits of which magically alchemize into purple nectar of the gods?  Yes, I think many of us have imagined our way to such a place a time or two, only to be reawakened at our paper-laden desks by a shrieking telephone.  David Stannard, on the other hand, has transformed the daydream into reality, and he has the bumps, bruises, and anecdotes (not to mention the wine) to prove it.  Mr. Stannard has written a charming account of his family’s 20+ year adventure in Cardan, a small town in Bordeaux, where they successfully fended off challenges from dramatic weather and the encroachment of residential housing developments to rehabilitate a plot of what they thought was Merlot but turned out to be Cabernet Franc.

Originally from England, Mr. Stannard spent most of his career working as an engineer for Shell, first at home, then in Amsterdam and, finally, in Australia, but he always had a soft spot for France.  As a child his parents, who themselves never traveled, encouraged him to spend a year in Normandy through a class exchange program.  At first unexcited about the prospect, young David profited well from his time in northern France: he learned to speak French and developed a fondness for the beautiful countryside and its people, not realizing that one day he would join their ranks.

The Stannards’ first glimpse of their future in France comes in 1990 during a hastily scheduled spring vacation, shortly after their relocation to the Netherlands.  (The description of their arrival in Amsterdam on New Year’s Eve, heralded by flaming Christmas trees tossed out of neighboring apartment windows is a highlight!)  Craving some rest and relaxation, the family heads to Charente, northeast of Bordeaux, and soon find themselves longing for a pastoral cottage of their own.  By the end of the vacation, they already know where they want to settle: Cardan, a small village along the Gironde River, just to the southeast of Bordeaux, in an area known to wine lovers as Entre-Deux-Mers.  Anyone who has enjoyed the tales of Peter Mayle (A Year in Provence) or Frances Mayes (Under the Tuscan Sun) will chuckle knowingly at Stannard’s description of the mysterious and often circuitous process by which the property becomes his.  But all’s well that ends well and, by the end, he knows he’s made the right decision, one that will forever change his life.  He explains it this way:

Warm quiet evenings were a great time to sit around and think about what could be.  Cardan is quiet!  You can hear the silence at night time.  It is the perfect retreat from a busy life.  However, even at that stage, there was a sense of something about the place that I could never explain.  A feeling of destiny and belonging.  It has always felt more like home to me than anywhere else on the planet.

As you can probably imagine, this is just the beginning of another project, a true labor of love.  Everything moves into high gear for Stannard the day his neighbor pops in for a chat and reveals that he is considering selling off a portion of his land to developers.  (High costs and unpredictable weather conditions, perpetual challenges to farmers, make selling to developers an attractive option, particularly as land values rise.)  It’s at this point that Stannard takes a stand: Pay Up or Shut Up, he calls his one-man quest to slow the creep of developers into his corner of paradise.    Buy the small parcels put on the market by his neighbors before the developers do.  Strike a blow for the farmers and keep Cardan quiet! 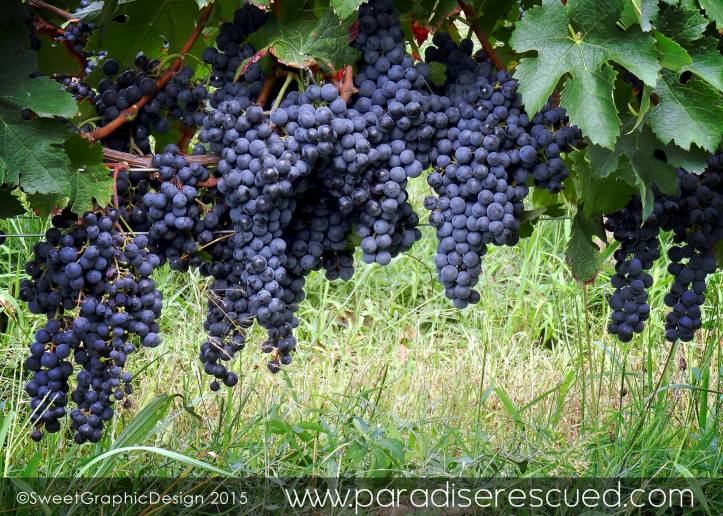 The adventure continues, with Stannard assembling a crew of dedicated wine professionals to help him realize his dream of producing a wine from organic grapes; a hand-crafted wine that would be attractive to oenophiles everywhere, not just in France.  Galvanized around a three-prong strategy of “good fruit, expert vinification, and market access” the team set out to take the wine world by storm.  One of their primary challenges would be to vinify, brand and market a wine made not from Merlot grapes but from Cabernet Franc.  As part of his Pay Up or Shut Up strategy, Stannard had acquired a small plot of what he believed to be Merlot vines.  Further analysis proved them to be Cabernet Franc, a noble grape capable of producing elegant wine, but without the name recognition of its well-known relative.  Add to that the fact that it is virtually unheard of to make a 100% varietal Cab Franc in Bordeaux.

But persevere they did and, in 2010 produced their first vintage, as detailed on their website:

The 2010 Paradise Rescued Cabernet Franc Cloud9 is a fine elegant fruity wine in the true Bordeaux Cabernet Franc tradition in this excellent vintage. The colour is a classic Cabernet Franc light bright red with an elegant nose of red currant and cherry finesse. The taste is smooth, with gentle tannins and increasingly beautiful integrated oak complexity. The flavour lingers gently but long on the palate. An excellent aperitif or food wine to serve with white meat, stronger fish dishes, pasta and mild cheese.  (N.B. Cloud9 is marketed in the U.S.A. as B1ock One.)

“Somehow we had created a miracle.  Somehow our attitude had kept a team together and delivered an unthinkable result,” says Mr. Stannard.  Marketing the wine, however, would prove to be a challenging task.  Stannard knew that they needed to develop a special value proposition for Cloud 9, otherwise it might get lost in the sea of mass-produced Appellation Bordeaux wine.  Without a unique niche, it would be relegated to the low-priced market reflecting neither the organic vineyard practices nor the care that went into its production.  In short, it would cease to be sustainable, not from a farming perspective, but from a financial one.  They needed to craft a story much as they had crafted a wine, explaining Paradise Rescued’s raison d’être – its commitment to supporting organic, sustainable agriculture in Bordeaux.  The team decided to put a huge effort into social media, where they could reach millions of potential customers efficiently and effectively.  It was an approach not embraced by many of their neighbors in Cardan, a fact that astounded Stannard.  “Why doesn’t every other Bordeaux chateau do this?” he asked himself.

Using Facebook, Twitter, Blogspot and, ultimately, the Paradise Rescued website, Stannard and his team invited wine lovers into their little corner of France, allowing them glimpses of the entire process, sharing their triumphs and obstacles, as well as little nuggets of personal motivation.  These motivations are an integral part of his book, too.  At the end of each chapter, Stannard shares a Personal Development Life Message, either his own or one borrowed from a person of note.  My favorite comes at the end of chapter three, where Stannard offers us one of his personal messages :  You have to cross the bridge if you want to take your life to the other side.

Paradise Rescued: From Cabbage Patch to Cabernet Franc offers us a chance to walk beside Stannard and his family and friends as they build a foundation under their dreams, seeking to nurture and protect this idyllic corner of France.  It’s a feel-good story that shows us, up close, the challenges inherent in committing to such a project.  But as Jean-Paul Sartre reminds us in the quote at the end of chapter two, “Commitment is an act; not a word.”

If you’d like to learn more about Paradise Rescued, visit their website (www.paradiserescued.com) where you can download the first chapter of the book for free.  The complete book is also available on amazon.com.

Thanks for all the birthday wishes! Gabe and I dined at hone, enjoying some of the best late-summer produce: Jersey corn on the cob and fresh swordfish kabobs with peppers and mushrooms. To toast the day we poured this lovely sparkling Cab Franc rosé from Domaine Fabrice Gasnier. La Cravantine is one of my favorites - full of red fruit and so food-friendly. It’s also Made via biodynamic methods. My official bday dinner with friends in NYC has been pushed to later this week, as I had to quarantine doe 10 days after being exposed to COVID. Feeling super-grateful for the vaccine. Cheers to a better year ahead!
Feels so good to be back in the city!
Friday the #tourdefrance2021 passes through Bordeaux - right past @paradiserescued an organic vineyard run by my friend David Stannard!
How did you celebrate America’s birthday? Gabe and I enjoyed poblano peppers stuffed with a mix of black beans, ground turkey, and cheese paired with the 2018 Reserve Plummer Vineyard Cabernet Franc from @dracaenawines in Paso Robles, CA.
Yikes!
Happy Birthday, Mom-mom! You’ve been gone for a while now, but your influence lives on. I love this photo of you, Lynne and me in the backyard of your house on W 11th Street. Surely you picked out our matching dresses, so similar to your own. Whenever I see a package of Milano cookies or a pint of rum raisin ice cream, you come to mind. So much love for all of us! Cheers to you, Evelyn Hahn Walsh. 🥂🎂