Longing for Lugana: A Virtual Tasting Fires Up My Wanderlust

Is it possible to long for a place you’ve never been? I assure you it is.

Maybe I can blame COVID-19 and how it has warped reality, turning my home town of Miami into a tense yet sad place where people argue in the elevators about wearing a mask. The fact that I rarely leave my apartment sharpens my desire to escape, if even for a few minutes. I find respite on the balcony, where Biscayne Bay stretches eastward to the Atlantic and there is at least the illusion of freedom.

In June I found another route of escape: every Tuesday night I joined the #winestudio program and, for an hour, found myself in northern Italy along the shores of Lake Garda. Thanks to Tina Morey, founder of the online wine education program, and Susannah Gold of Vigneto Communications, east coast brand ambassador for the Lugana DOC, I could pretend I was somewhere else.

What a joy that was!

Note: The wines mentioned in this post were provided to me as tasting samples. I received no other compensation, and the opinions expressed herein are my own.

Lugana DOC: the Region, the Grape, the Wine

Lugana DOC lies at the southern edge of Lake Garda and has vineyards in both Lombardia and the Veneto. Parcels close to the lake lie on a flatter plain, with rolling hills forming a semi-circle to the east, south, and west. It all adds up to a cozy little microclimate, with winter temperatures modified by the lake’s influence.

Grapes have been grown here since Roman times; indeed, it may have been these early settlers who gave the region its name. Lugana comes from the word lucus, which means forest. Most of today’s vineyards lie on what was once called Selva Lucana, an area of dense marshlands and forest. Not a place one imagines grapes would be grown.

As unlikely as it seems, that inhospitable terrain lay atop some very special soil, a mixture of white clay and limestone. Difficult to cultivate, perhaps, but also capable of imparting rich texture and pronounced aromas to the grapes grown upon it.

Formed during the Ice Age, these soils are the product of moraines: mass deposits of dirt, rocks, and other matter forced together by the movement of glaciers. In the Lugana DOC, the morainic soils are characterized by a layer of clay near the top, a factor in the richness noticeable in many of the wines made here.

Despite proximity to the lake, the risk of disease and frost is low. Any lingering humidity is blown away by the gentle but constant breezes coming off the lake. Temperatures don’t fluctuate much, providing a comfortable place not just for vines but for the olive groves that dot the landscape. Local growers refer to these idyllic conditions as a “climatic cradle.” Doesn’t that sound lovely? I wonder if I can volunteer in those vineyards indefinitely!

Turbiana belongs to the large Trebbiano family of grapes. But that’s like saying John Smith is part of the Smith clan – not so helpful. There does appear to be a relationship with Trebbiano di Soave from the Veneto, as well as Verdicchio from Le Marche. While there are similarities to both, Turbiana has distinct aromatic and flavor characteristics, and it is slightly less productive. Turbiana grapes also have a unique thin, white patina as they ripen, which some compare to a light dusting of flour.

Unless you’re with the Italian wine authorities, Turbiana’s family tree matters little. It’s more about what’s in the glass. Based on the four wines I sampled during the #winestudio program, I can say this: all have ripe citrus and orchard/tropical fruit balanced by tart acidity. None of the wines I tasted was sweet but each exhibited a tantalizing ability to lure me with a rich, full-bodied texture kept in-bounds by that crisp, fresh acid. A ballerina en pointe, an acrobat on the high-wire. In a glass.

100% estate-grown Turbiana from the subzone Lugana di Sirmione, a spit of land jutting out into Lake Garda. No herbicides are used in the vineyards and fertilizers are organic, thanks to the cattle and horses living nearby. Vines are tended and harvested by hand and yields are kept low (less than one ton per hectare.) Pressing is gentle, and only free-run juice (mosto fiore) is used, leading to a pure and highly aromatic expression of the grape. No oak influence.

Palate: All the fruit of the nose but held in check by tart acidity. There is some weight to this wine; it’s rich and smooth but still fresh. I kept sipping it, trying to pinpoint all the flavors. In short: it’s ripe, it’s fresh, and it’s just damned delicious.

Another 100% Turbiana wine, this from San Benedetto di Lugana, with its soils ribboned with white clay. The growing season is long here, as in the rest of the DOC, with grapes hanging on the vine until late October. They take their time ripening, accumulating sugar slowly, in step with the development of other phenolic components. And because this happens gradually, the grapes hold on to that all-important acidity.

As a Riserva wine, this must adhere to minimum aging requirements (at least 2 years total, with at least six months in bottle.) This wine was fermented in stainless steel vats, where it underwent partial malolactic conversion and then rested on the fine lees for 16 months. After racking, the wine continued to mature in wood barrels.

Palate: A delicious combo of ripe orchard fruit, citrus, and a saline/mineral component. Acidity is medium+ and it has full body. More savory than the first wine, this is more complex because of time on its lees and in barrel. 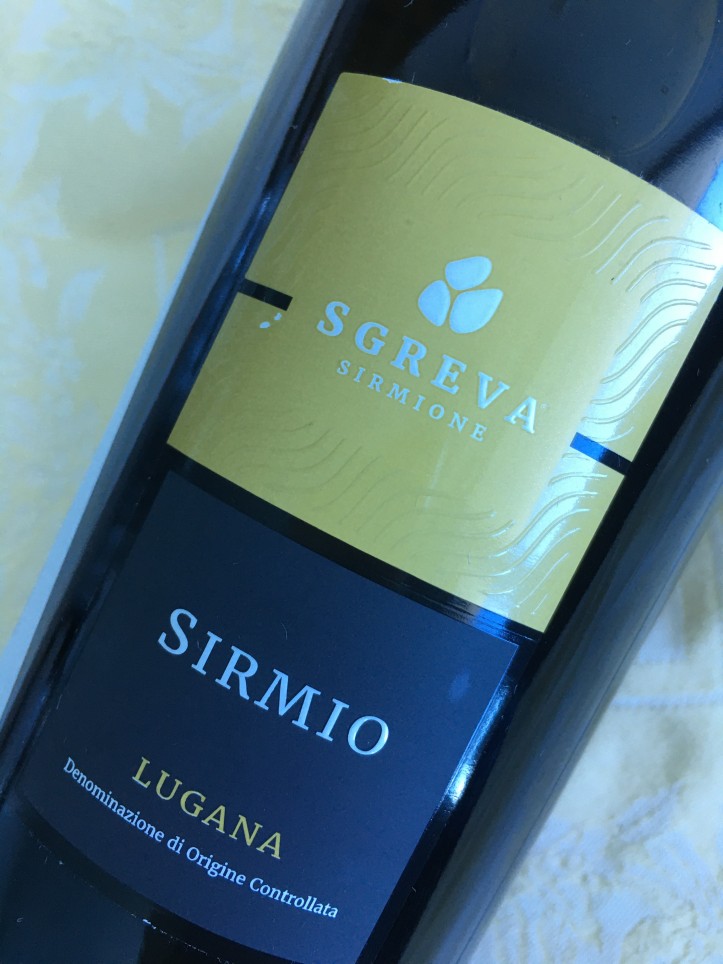 100% Turbiana from the communities of Sirmione and Pozzolengo, where vines are planted at 60-80 metres above sea level, on south- or southeast facing slopes. Fermentation takes place at cool temperatures in stainless steel vats, and the wine spends four weeks on its fine lees. The Sgreva family, originally from Verona, also grows Gropello, Marzemino, Sangiovese, Barbera, Cabernet Sauvignon, and Cabernet Franc.

Palate: Mineral notes are up front on this wine, with the fruit singing harmony. More tropical flavors of pineapple and starfruit, less ripe than the other wines. Acidity is higher, too, making for a more tightly-laced impression on the palate. I think this one could stick around for a few more years. 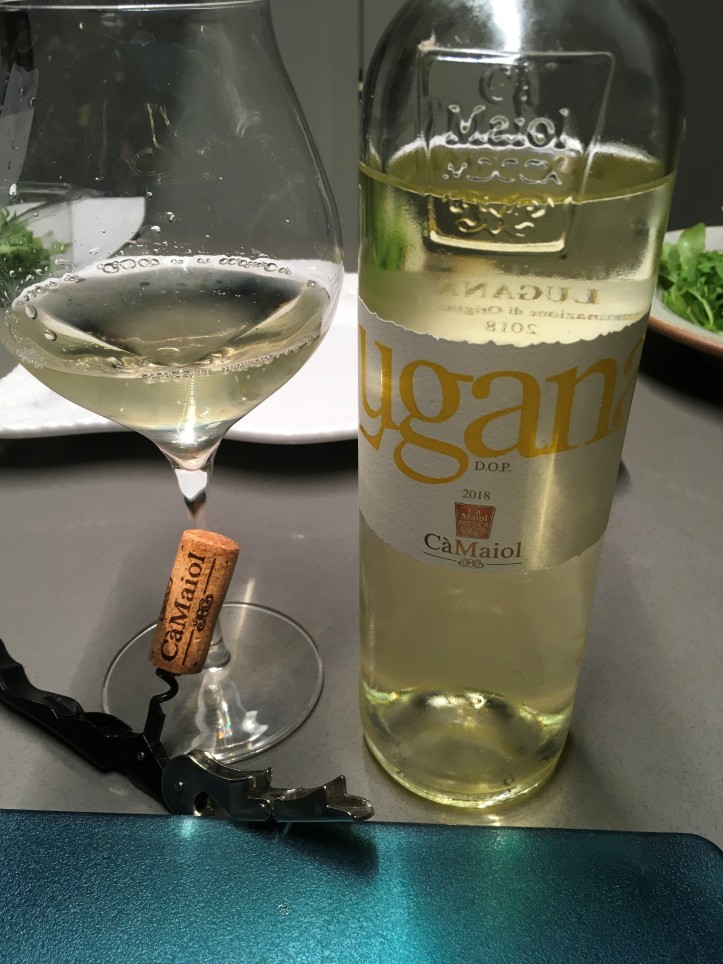 Grapes for this wine were grown on plots that were part of the original farm, Cascina Maiolo, founded in 1710. Now the estate is part of the Santa Margherita Gruppo Vinicolo, but is still operated by the family of Walter Contato, who founded the winery in 1967.

Palate: Juicy, ripe fruit with a spine of acidity; a mineral current that runs throughout. Eminently drinkable and a delicious food partner, this wine would be the perfect apéritif to sip as you watch the sun set over Lake Garda.

While researching a future post on Italian rosato wines, I came across a bottle from Cà Maiol and had to try it! It comes from Valtènesi, which lies on the west side of Lake Garda, in Lombardia. The winery calls it their “One-Night Wine” because the must rests on the grape skins for a single night, extracting just the right amount of color and structure. It’s a blend of Gropello, Marzemino, Sangiovese, and Barbera, and has effusive aromas of strawberry, cherry, and almond. On the palate it’s a delight: ripe red fruit, tangy acidity, and just a kiss of tannins come together in a refreshing summer sip.

I hope I’ve inspired you to explore the wines of Lugana DOC. As you can tell from my tasting notes, they’re perfect for summer sipping but they’re full-bodied enough to make the transition into fall and beyond. These wines are also super-compatible with a whole range of food: even Mexican cuisine was a home run.

Grab a bottle or two, whip up something simple and delicious, and head to your backyard – or your balcony. Prop your feet up, take a deep breath, and imagine you’re sitting on a terrace in Lugana. Have a sip of wine and relax.

That place you’ve been longing to escape to? You’re there.

A couple of my friends who were part of the #winestudio event have published their thoughts on the Lugana experience, too. Check out what they have to say:

Margot from Write for Wine

It’s soup weather in the 305 and I couldn’t be more thrilled. I do feel (a little) bad for the tourists wishing for balmy beach time.
A variation on my favorite farro salad included strips of balsamic-glazed portobello mushrooms on top. So easy and delicious!
Some nights you just need Sangiovese, am I right? Paired with an excellent vitello alla Milanese from @perricones here in Miami, the Testamatta (crazy head) from @bibigraetz in Tuscany was perfect.
New @delta terminal at LGA is superb! The transformation is unbelievable, especially when you consider the old terminal functioned throughout the massive construction process. Smooth sailing all the way through!
Happy 2023 everyone! Wishing you all good health, good friends, and (of course) good wine in the coming year. Feeling grateful, letting go of the challenges of 2022 and opening my heart to the potential of 2023. Cheers to all the good things! 🥂
Delightful anniversary dinner last night at @bardeasteak - mini Cuban sandwiches made with wild boar and served in a wood cigar box; elk meatballs in a lovely sauce; a wagyu tartare. And that was just the appetizers!