As a kid I anticipated a trip to the school library the way most of my friends loved recess. Given the option, I’d choose reading lab over gym class any day, making me a bit of an oddity among my classmates. I didn’t care! A good book was like a passport to the world, bridging the miles between me and wherever I wanted to go.

My favorite stories transported me to far-away lands; places I might never see through my own eyes, made real thanks to characters I’d never meet. I delved into the strangely alluring world of the supernatural, thrilled by ghostly encounters and inexplicable events.

Summertime was the best: weeks and weeks of reading, interrupted by occasional dips in the neighborhood pool. My mom, herself an avid reader, made frequent trips to the county library and signed me up for a card as soon as I could read.

Mom and I would go our separate ways among the stacks, each of us curating a collection of books that would keep us busy for two weeks – the library’s maximum lending period. We’d fill the back seat of the car with our quarry, devouring them one by one until it was time to exchange them for a new supply.

While my taste in reading material has evolved over the years, my passion for reading has only intensified: probably because I have so much less time to devote to it! I long for those childhood summers when all I had was time – and an ample supply of books to fill it.

Most of my free time this spring was spent preparing for the WSET Diploma exam on sparkling wines, which occurred in June. I love wine and learning about it has become a passion, one that I’m trying to turn into a career. But, after spending 100% of your time delving into the weeds of wine production, the wine business, and blind tasting exercises, you long for something else to focus on. Anything else.

After the exam, I caught up on my sleep, let my stress recede to somewhat normal levels, and decided to read a book. For pleasure. That book led to another, and then another. Since the end of June I’ve been engaged in the bibliophile’s equivalent of chain smoking. And I’m totally cool with that.

As we’ve got a few more weeks before reality forces us back to our full-time responsibilities, here’s a list of what I devoured this summer. Maybe it will encourage you to rediscover your inner bookworm, too.

What I’ve Been Reading

Somehow, I’ve managed to select books aligned on a theme. It wasn’t intentional; I chose stories that interested me and which had a few good reviews. That said, this turns out to be the Summer of Women on Monumental Journeys. Some are light-hearted and fun; others are intense and emotional, requiring a break now and then. I’ve been all over the world and traveled through centuries. I’ve experienced riches and poverty, families both close-knit and torn apart. Each book took me on a personal odyssey with strong women as they coped with loss and surmounted obstacles in their path.

Please allow me to introduce you to my fabulous traveling companions:

Erin Locke from Something in the Water by Catherine Steadman

Erin lives in London and is producing a documentary film about criminals re-entering society after they’ve served their prison sentences. She and her husband Mark, an investment banker, just tied the knot and have jetted off to the South Pacific for a luxurious island honeymoon. Any more details and I’ll spoil the suspense for you.

This book is a plot-driven page-turner; in other words, the perfect beach read. Crime and Punishment, it is not, but it’s thrilling and delicious. And it just might have you looking over your shoulder from time to time. Bon voyage!

What to sip while you read: Piper-Heidsieck Brut Sauvage Rosé. It’s Christmas in London, followed by a ritzy tropical honeymoon trip: pink Champagne is perfect! But you’ll probably want something stronger (single-malt Scotch) for the rest of the story. 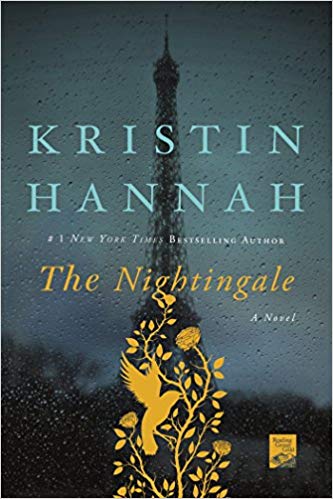 Vianne Mauriac and Isabelle Rossignol from The Nightingale by Kristin Hannah

This book is intense and, I warn you, it will leave a mark. That said, it’s a beautifully written story about two sisters living in France during World War II. It takes the reader close – sometimes uncomfortably so – to the experience of women trying to survive and protect their families in wartime. You will laugh, you will definitely cry; you’ll experience devastation and triumph alongside these heroic characters. In fact, you’ll feel as if you’re walking in their shoes.

Paris, the Loire Valley, and the Basque region of France and Spain are all part of the scene, and Hannah does a great job of putting you in the middle of the action. That alone is worth the tears.

What to sip while you read: Domaine Ricard “?” Touraine Sauvignon Blanc. Produced in the region where much of the story takes place, this wine will be a comfort as you navigate the sadder scenes. You might want to get two bottles.

Myfanwy Thomas from The Rook by Daniel O’Malley

After reading The Nightingale, I needed a dramatic departure from wartime France, so I turned to modern-day London and the political intrigue of The Rook. Named for a clandestine government agency run by folks with super-human powers, this novel vaults you into the future. It’s cleverly written and keeps your attention as conflicts develop, intensify, and are (possibly) resolved.

Sci-fi/fantasy is not usually my cup of tea but this book was thoroughly enjoyable. Note: The Rook has been adapted into a television series currently airing on Starz. If you’ve seen it, don’t worry: after watching the first episode, I decided it bears little resemblance to the book. Ditch the TV version in favor of the original.

What to sip while you read: D.V. Catena Malbec Adrianna Vineyard. It’s deep and dark, just like this thriller. It’ll be good company as you realize it’s past midnight and you’ve been reading for three hours!

Kitty Milton and her Granddaughter Evie from The Guest Book

Switching up the scenery, I left futuristic London in favor of patrician New York City and a private island off the coast of Maine. The story spans several generations, from just before World War II to the present day, and examines issues of class, race, sexuality, and feminism mostly through the paths of the women in the Milton family.

While not as haunting as The Nightingale, The Guest Book presents a few harsh realities of its own, and is at its most powerful when touching on the idea of redemption, whether it’s personal, professional, or on an even larger scale. A quick read, but one that will make you stop and think for a moment. 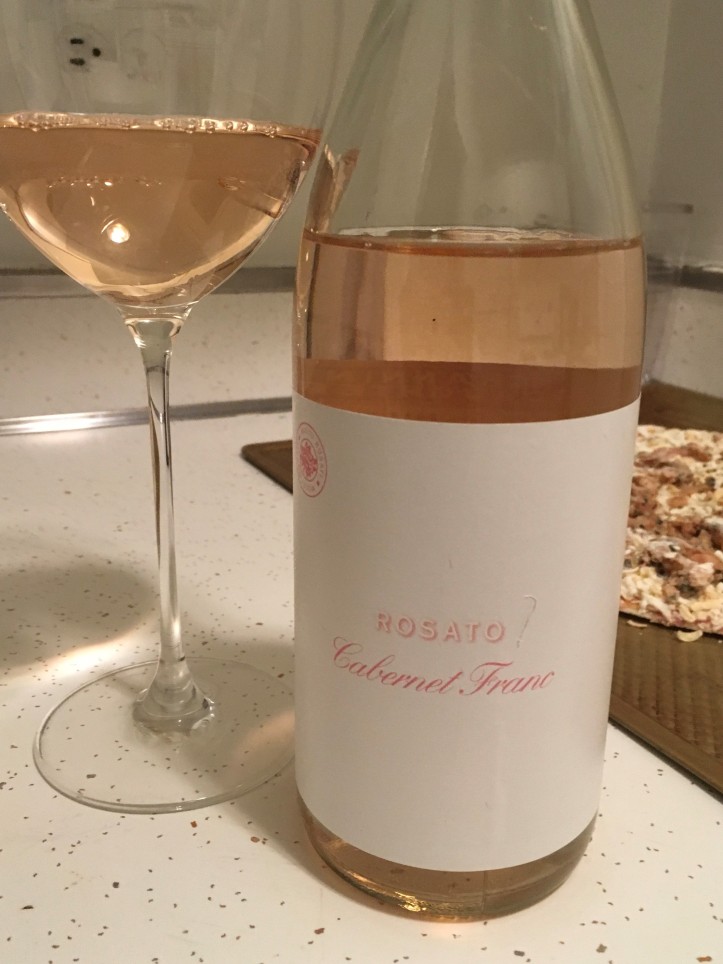 What to sip while you read: Channing Daughters Rosato of Cabernet Franc. It’s made on the North Fork of Long Island, where a bit of the story takes place, and would be perfectly at home at the Milton family’s mandatory 6:00 pm cocktail hour. Gin and tonic poured from a silver, monogrammed hip flask would also be acceptable. Don’t forget to dress for dinner!

I just finished this book a few days ago, and Stella is definitely still with me. The story begins in the poor Calabrian village of Ievoli, nestled in the mountains of southern Italy. As the title indicates, we follow Stella’s life from early childhood in Ievoli, through immigration to the United States and her adult life in Hartford, Connecticut.

Her story unfolds, one near-death experience at a time, with her first traumas occurring in childhood: burning herself with hot oil and being trampled by the family pigs. Later in life she survives bludgeoning, drowning, choking, and massive blood loss. Stella experiences each one in the context of a major life event such as adolescence, marriage, and motherhood.

As we travel with Stella, we sense the strong family connection she has, especially to her mother and sister, female cousins and friends. It’s a theme that continues to the end, when Stella takes drastic action to protect her young grand-nieces.

My favorite of the books I’ve read so far, this book is a postcard from southern Italy, chock-full of Calabrian scenery, culture, and tradition. As the story continues, we have a front-row seat to the Italian immigrant’s transition to life in America: discrimination, hard work, and the forging of new traditions are all stops along the way.

At its heart, though, the novel makes a strong statement on the place of women in society, and how much it has changed (or not) since the early 20th century. It made me look back at my mother and grandmothers – and all the women who came before them – with respect and awe.

Simply said, women give life, nurture life, and preserve life. It’s a heavy responsibility carried out every day, by women who don’t consider themselves heroic or extraordinary. They’re doing what needs to be done, no more or less. Just like Stella.

Stella is brave, stubborn, and brimming with life. I found myself cheering her to the end, even when I found her disagreeable and selfish. She is also a force of nature, like a human hurricane, whose power is undeniable and sometimes dangerous.

I wanted her story to go on, and on. And on.

What to sip while you read: Du Cropio Damis Riserva from Ciró DOC in Calabria. Made in the province where Stella spent her childhood, this Gaglioppo-based red wine is full of ripe red and black fruit flavors. If you want to emulate Stella in her later years, buy a jug of cheap wine, sit back in the armchair, and drink every last drop, all while staring at your sister’s home across the street.

What’s Up Next: The Night Tiger by Yangsze Choo

I haven’t started it yet, but this story will transport me to Malaysia, during the 1930s, when it was under colonial rule. Ji Lin, a dressmaker’s apprentice, wants to attend university but must work to support her mother. A mystery ensues, one that weaves folklore and mythology into a historical context.

Can’t wait to dive in!

Continuing my love affair with Bordeaux Blanc, which was stoked in a big way by my recent trip to the region with the folks from @millesima Tasted plenty of gorgeous red wines too, but there’s something about the blancs that really fires me up!
Cold and damp weather prompted a pairing of Lemony White Bean Soup with Turkey from @nytcooking and organic Vermentino from southern France. The soup with its splash of ginger, tomato paste, and cumin warms the bones, while the wine promises that the warm weather will return. I’m happy!
Lovely introduction to #virginiawine this afternoon in NYC. Started with a guided tasting of eight wines, which included a brief history of winemaking in the state and an overview of the unique terroirs.
Sunday was bright and breezy in NYC, perfect for this méthode ancestrale sparkling wine from Patrick Bottex in Bugey-Cerdon in Eastern France.
Gabe made my homecoming from a whirlwind week in Bordeaux so easy. The apartment was clean, the fridge full of groceries, and he cooked our dinner. Of course I had to bring him some tasty treats from my travels!
Getting so spoiled here in Bordeaux! Case in point: our lunch at @lamaison_estournel which is the hotel/restaurant associated with @cosdestournel in Saint Estephe. Ceviche of stone bass with mango, followed by faux-filet of beef with mixed Provençal peppers served with white and red wine from the esteemed winery. Dessert was a fresh strawberry tart with pistachio shortbread and whipped cream. Ooh La La!