Tour de France by the Glass 2019 Stage 6: The Beast We’ve Been Waiting For!

According to some sports writers, analysts, and excited fans, the “real” beginning of this year’s Tour is Thursday. Yep, stage 6 is where it all starts.

Despite four days of racing, the cycling gods have yet to commence the merciless and vigorous sorting of the victims contenders that invariably occurs on the initial mountain stage. I think they’ve been unnecessarily cruel this year, allowing the peloton (and us) to fall into a comfortable complacency: a place of rolling, green hills, ancient castles, and not too much hard work. Sure, we get a few thrilling minutes at the finish, but we haven’t had to pay a lot for it.

Thursday we will pay.

Here is the profile map of stage 6, with its 7 categorized climbs, each of which scrapes the sky at between 3,000 and 4,000 feet in altitude. (Maps courtesy of LeTour.com)

If you take a closer look, you’ll see that the finish line lies at the tippy-top of one of cycling’s most iconic climbs: the Planche des Belle Filles – a route that rises to a 24% gradient in some parts. 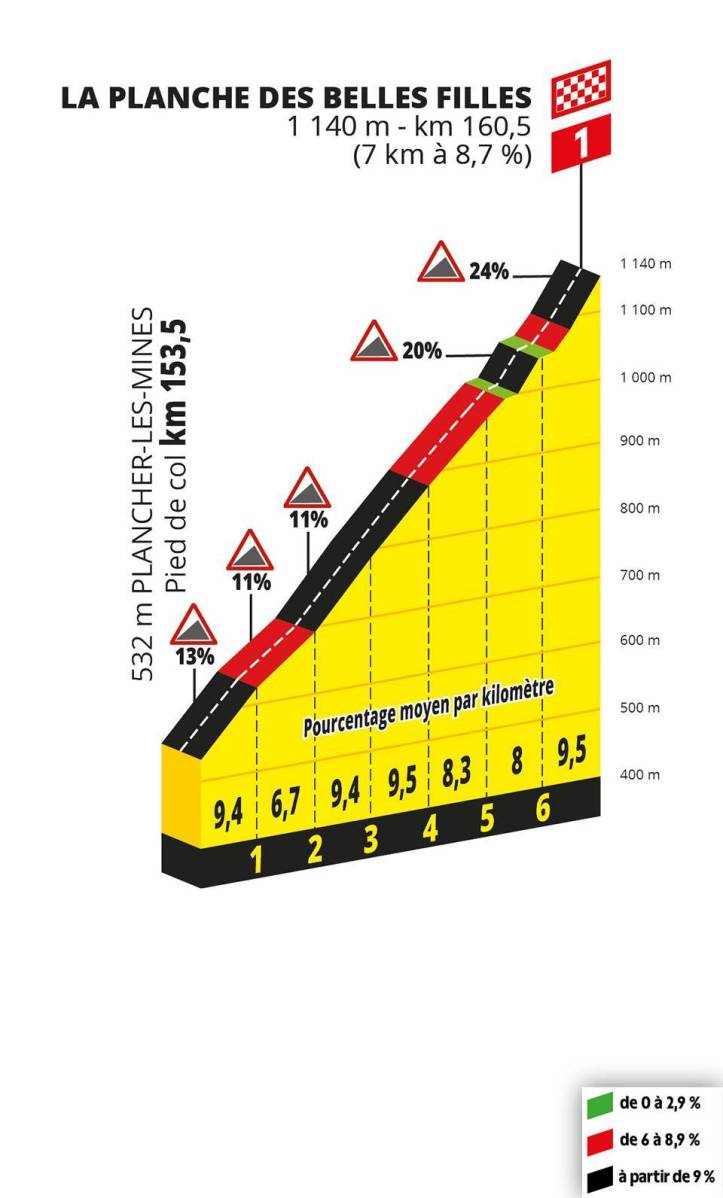 What this Means for the Race

Stage 6 will act as a metaphoric thresher, separating those riders who stand a chance to win the overall yellow jersey from the – ahem – chaff, so to speak. Overzealous climbers will be punished for exerting themselves too early in the day, finding their gas tanks empty as they reach the start of the final ascent. Others may just have a bad day. A few, however, will be blessed by the holy trinity of Grand Tour cycling: fresh legs, eager teammates, and a day free of errant obstacles (like the umbrella that flew into the peloton on stage 5.) Video from LeTour.com.

Who knows what the GC standings will look like at the end of the day? But it’s sure to be an exciting one for us spectators!

What to Sip While You Watch

Despite the dramatic change in terrain, we’re not all that far from where we were on stage 5, which means Alsace wine for another day. No complaints here!

There are so many lovely wines to choose from, and they are widely available. Why not pick up a bottle or two, invite a few friends over for a viewing party, and snack on a platter of charcuterie and cheese as you cheer on your favorite riders?

I’ll be back tomorrow with a recap of who’s still in contention, where the race heads for stage 7, and some new recommendations on what to sip while you’re making sense of it all.

Continuing my love affair with Bordeaux Blanc, which was stoked in a big way by my recent trip to the region with the folks from @millesima Tasted plenty of gorgeous red wines too, but there’s something about the blancs that really fires me up!
Cold and damp weather prompted a pairing of Lemony White Bean Soup with Turkey from @nytcooking and organic Vermentino from southern France. The soup with its splash of ginger, tomato paste, and cumin warms the bones, while the wine promises that the warm weather will return. I’m happy!
Lovely introduction to #virginiawine this afternoon in NYC. Started with a guided tasting of eight wines, which included a brief history of winemaking in the state and an overview of the unique terroirs.
Sunday was bright and breezy in NYC, perfect for this méthode ancestrale sparkling wine from Patrick Bottex in Bugey-Cerdon in Eastern France.
Gabe made my homecoming from a whirlwind week in Bordeaux so easy. The apartment was clean, the fridge full of groceries, and he cooked our dinner. Of course I had to bring him some tasty treats from my travels!
Getting so spoiled here in Bordeaux! Case in point: our lunch at @lamaison_estournel which is the hotel/restaurant associated with @cosdestournel in Saint Estephe. Ceviche of stone bass with mango, followed by faux-filet of beef with mixed Provençal peppers served with white and red wine from the esteemed winery. Dessert was a fresh strawberry tart with pistachio shortbread and whipped cream. Ooh La La!