No surprise, given the stage profile map, that we find ourselves in Switzerland again today.  The peloton will climb steadily, right out of the gate, conquering two Category 3 ascents, followed by a sprint.  It is then that the true torture begins:  a Category 1 climb up the Col de la Forclaz at 4,600 feet, followed by a perilous descent.  And then right up again, to the summit of Finhaut-Emosson, an HC (beyond category or, as I like to say, Horrible Climb) topping out at almost 6,000 feet.

I’ve got my fingers crossed that the top GC contenders will put on a show for us today, waging a classic mountain war in the Alps.  Normally I’d not bother with the finger-crossing, Ouija board, or other talismans; but the 2016 Tour has been short on mano-a-mano duels on the roads of the Pyrénées and Alps.  I’m talking about classic battles like Alberto Contador vs Andy Schleck, or Jan Ulrich vs He Who Shall Not Be Named.  Chris Froome vs himself.  Maybe that’s the best we can hope for on Wednesday, as Nairo Quintana seems unable to challenge Froome for dominance on the slopes.  My prediction is that Froome will solidify his lead, ensuring a third Tour victory for himself.  Go Froomie!  At least the sprint finishes have become more exciting, though, so I guess there’s that . . . .

I felt rather lame sending you to the Jura  in France for my TDFBTG wine recommendation on Stage Sixteen.  Not because the wines are in any way unappealing; in fact they can be quite nice.  But I hated not having a bottle of Swiss wine to talk about.  Yes, they’re difficult to find.  Yes, they’re made from rather obscure grapes.  But as your guide through the vineyards the riders whiz by every day, I thought I could do better.  I’m in NYC, for goodness’ sake!  If I can’t find a Swiss wine here, I should be ashamed of myself.

Mr. Wright, to the rescue!  That is, Mr. Wright Fine Wine and Spirits on the Upper East Side.  Just a few blocks away, this wonderful oasis of wine has a comprehensive inventory of tempting bottles, and a well-informed and very friendly staff to help you find your way.  Of course they had some Swiss wines.  Not many, but a few.  So I, ever willing to put myself at your service, brought home two bottles:  a white made from Fendant (aka Chasselas), and a red from the intriguingly named Humagne Rouge.  Both of the wines I sampled come from Cave Caloz in the Valais Canton. 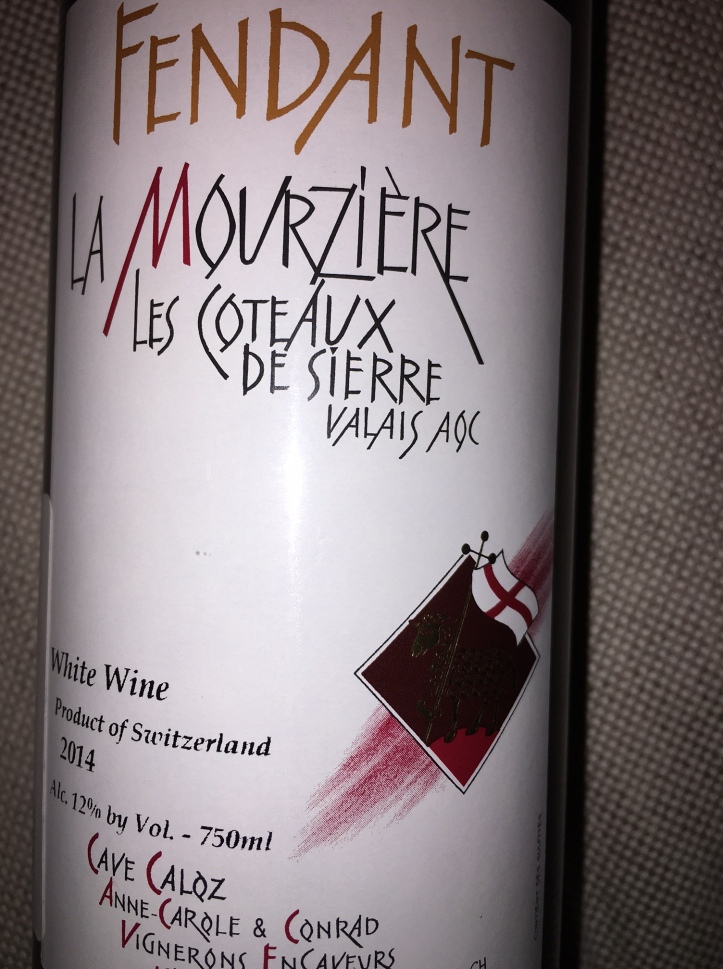 Better known by its alias, Chasselas, Fendant is the most-planted white variety in the country.  Its origins lie in the Canton of Vaud, the center of French-speaking Switzerland, but it is known and loved (or loathed) in patches all over Europe.  The French, in particular, dislike Fendant because they consider it a table grape, one better suited to eating or drying than for making wine.  Its propensity toward high yields and the ensuing lack of concentration can be challenges for the winemaker.  However, along the northern shores of Lac Léman (Lake Geneva) Fendant can give rise to clean, crisp wines that are quite expressive of their individual terroirs.  They are traditional accompaniments to fondue and have been compared to Sauvignon Blanc in terms of body and acidity.

Tasting Notes:  At first glance, this wine is pale lemon yellow, fading to almost clear at the edges.  On the nose, there are notes of pear and lemon; it smells “warmer” to me than its color would suggest.  There’s also a whiff of chalk not unlike what you’d expect from a Chablis.  A sip verifies the pear notes, and definitely citrus.  Lots of acidity, and something floral on the crisp finish.  This is a really nice wine, with more body and weight than I expected.  I tasted the wines with a gorgonzola, sweet onion and bacon pizza from Fresh Direct (which I have grown to love the past few weeks).  The Fendant was an agreeable match, although it showed up a little leaner with the food than it did alone.  Maybe I wanted a hint of sweetness to bring out the salty?  That aside, this is good juice.  Comparisons to Chablis are not out of line.  Next time I’d pair it with shellfish or maybe a simple gratin of summer squash and goat cheese. 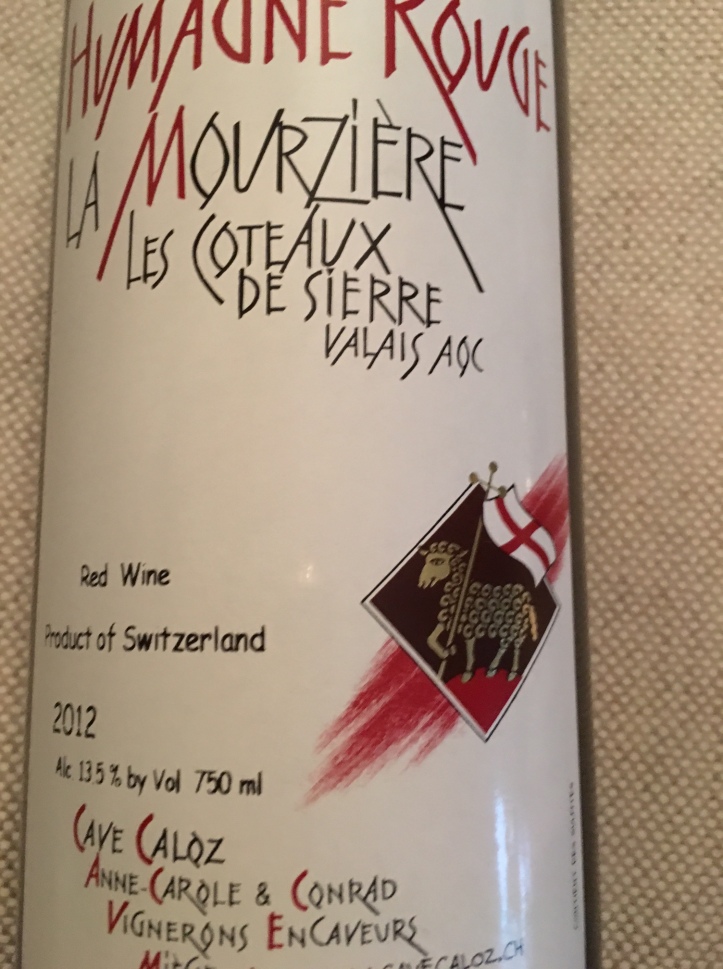 Local to the Swiss Canton of Valais (known as the California of Switzerland, courtesy of its sunny climate), Humagne Rouge makes intense red wines known for their strong tannins and rustic nature.   DNA analysis proves it to be identical to Cornalin, native to the Aosta region of northwest Italy.  In the vineyard, Humagne Rouge can be fickle, requiring lots of attention, and is notoriously late in ripening.  (Okay, at this point, I’m hoping that the one I picked up will taste better than it sounds.  Vamos a ver . . . .)

Tasting Notes:  Right as I poured it, I thought it looked milder than the descriptions had led me to believe.  The ruby color is not dense, looking much older to me than its four years.  On the nose there’s an almost overwhelming punch of strawberry, reminding me of a freshly made pie in the oven.  Really sweet.  There’s also a whiff of something musky, a little funky.  My first taste shows that it’s of medium weight.  There’s some bitterness, a definite peppery bite.  The tannins are right up front but they don’t deliver too much of a punch.  Licorice and herbs on the finish, nice acidity.  I keep looking for the sweet fruit of the nose — where is it?  The more I think about it, it feels as if this wine has been put into a straightjacket.  Or maybe I’m just not familiar enough with Humagne Rouge.  With the food it’s better, although I’d still like a little more weight to balance out the tannins.  Next time, I think I would try this wine with meat.  Venison is a recommended pairing, so perhaps that.  Although I can’t think of any wine better with venison than California Zinfandel; this is no Zinfandel.

I did like both of these wines.  The Fendant, especially, had charm and I thought it would be a great partner with a host of dishes.  Its racy acidity and mineral character reminded me of a Chablis, no mean feat.  The Humagne Rouge was a bit more  of a stretch for me, but I definitely see potential.  The disconnect between the nose and the palate was a jolt, but perhaps with a better food match there would have been better synergy.  That said, the price of these wines was rather high.  At over $30 a bottle, I would prefer to stick to some of my old favorites, most of which can be had for less than $20.  But I’m glad I went in search of some bona fide Swiss wines: after all, you’ve got to keep tasting if you want to continue to understand, grow, and appreciate. 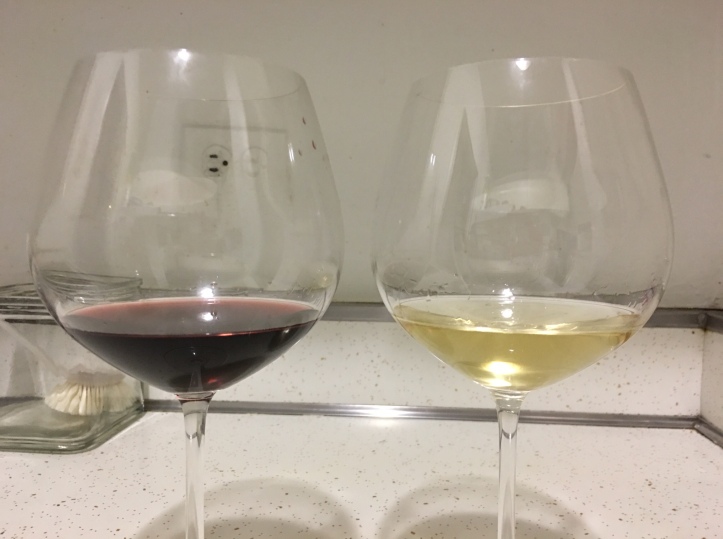 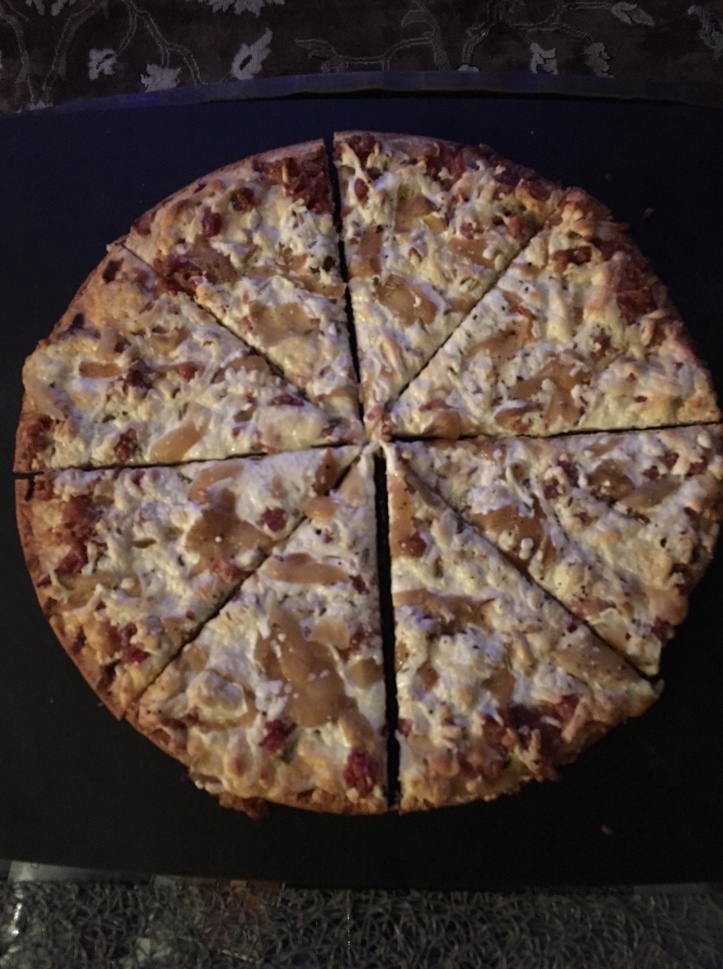