All Roads Lead to Riesling (#winestudio)

I may have co-opted the famous saying about perceived Roman dominance many centuries ago, but I feel it’s appropriate.  After all, Riesling has made quite powerful friends of late, namely the sommeliers who love to tout its unmatched affinity for a wide range of cuisines, not to mention its ability to age for decades without losing any of its famed balance and finesse.  But in reaching the average wine consumer, Riesling has had a tougher row to hoe.  Despite the professional plaudits and reasonable retail pricing, Riesling still takes a back seat to reliable old stand-bys like Chardonnay and Sauvignon Blanc, when customers ask for a white wine by the glass.  Why is that?

During the month of January, I had the chance to learn more about Riesling from the Mosel region of Germany, courtesy of Wine Studio, the interactive wine education program created by Certified Sommelier Tina Morey.  Her guests included Amy Ezrin from Massanois Imports, a firm focused on marketing high-quality, small-production wines in the US, and Mike Shaw, long-time sales agent for Weingut Max Ferdinand Richter.  Bottles from the premier properties Karthäuserhof and Weingut Max Ferdinand Richter, were featured in the tasting portion of the program.  We were also privy to a discussion of the challenges facing German wines in the U.S. market, including customer perception of the wines as homogeneously sweet, and a dearth of distributor partners in some states.  Add to that the complexity and inanity of the three-tier distribution system  which eliminates the availability of on-line shopping for buyers in many states.  Suffice it to say, I learned a lot.

Having been around the wine block a time or two, I’m familiar with the knee-jerk reaction exhibited by some folks at the mere suggestion of a Riesling:  “Oh no!  I don’t like sweet wines at all.”  Even a patient explanation of the facts (and not alternative facts, mind you) fails to make them comfortable with the idea.  Pretty much the only way to bring them around is to share a sip from my glass or, if we’re chez moi, pour them a glass of Riesling from my own stash – especially if I don’t tell them what it is first.  (Sneaky, yes; but also quite effective.)

Once we’ve cleared that hurdle, the next one arises:  “But how do I know if a particular glass/bottle will be to my liking?  I don’t like surprises.”  My advice?  If you’re in a restaurant, ask the bartender/waiter/sommelier.  At the risk of oversimplifying things, a Riesling on the by-the-glass menu will likely be dry, simply because that is the style so many people prefer.  And quite a few places will even offer you a taste of the wine before you decide.  Little risk, high potential for reward, in my opinion.  If you’re exploring the shelves of your local wine shop, the same advice applies:  ask questions.  Most of the folks wandering the aisles of the shop are there because they love wine and, more importantly, love to talk about wine.  Take advantage of that!

Should you find yourself trapped in the no-man’s land of a grocery store wine section, take a look at the label of the bottle that interests you.  Some of it may seem inscrutable at first, but stay the course.  You’re looking for the tiny numbers indicating the percentage of alcohol by volume (ABV) that’s required on every wine label.  (FYI:  It’s often found in tiny font, along the margins of the label.)  Again, at the risk of oversimplifying, an ABV of 12% or higher usually indicates the wine will be dry, with very little residual sugar (what makes a wine taste sweet.)  ABVs below 11% will usually mean the wine is noticeably sweeter.  But, in my opinion, there is a beautiful Sweet Spot (pun most definitely intended) occupied by those wines weighing in between 11% and 12% ABV.  They have some residual sugar, yes, but they also have refreshing acidity that reduces the perception of overt sweetness on the tongue.  The overall impression is a wine that is balanced, elegant, and crisp.  And, I might add, this hint of sweetness is brilliant when paired with Asian or Indian cuisine.  So venture forth with confidence and daring!  Try a few bottles or have a glass or two at your local wine bar.  It’s definitely an adventure worth taking.

(Are you interested in learning more about the terms listed on German wine labels?  Check out this page from German Wine Estates: The Site for German Wine Lovers.  It’ll explain a lot!)

Here are some notes from my recent tasting adventure during Wine Studio.  (Note: these wines were graciously provided by the importer, but with no strings attached.  The observations and opinions contained herein are strictly my own – for better or worse!)

The Wines of Karthäuserhof

The Karthäuserhof estate lies in the small village of Eitelsbach, where the Ruwer and Mosel rivers meet.  As with all the best sites in the region, vineyards are planted on steep south and southwestern-facing slopes (55% gradient) overlooking the river; soils are predominantly slate.  To protect the vines from cold and wind, land adjacent to the vineyard has been preserved as a natural forest, which also provides a habitat for local wildlife.  This approach is in keeping with the estate’s goal of sustainable agriculture: only organic fertilizers such as manure and bulk mulch are used. Pesticides have been replaced by natural pheromones that inhibit harmful insects from reproducing.

Winemaking here dates back to Roman times.  The estate itself was constructed during the 11th century by Carthusian monks (Karthäuserhof translates to “Farm of the Carthusians”) but was ultimately sold at auction in Paris –  a victim of Napoleon’s drive to secularize the region.  Since then, the single-vineyard, 19-hectare property has been owned and managed by successive generations of the Leonardy and Tyrell families.  Riesling (most of which remains on original rootstock) is and always has been the focus at Karthäuserhof.  But what distinguishes these wines from those produced at most other estates in the Mosel region is their focus on dry wines.  For the first time, in 2009, they crafted a Grosses Gewächs (loosely translates to “Great Growths”); it has been a stand-out of the portfolio every year since.

Wine Studio participants sampled two different Rieslings.  All of us received a bottle of the 2015 Riesling Ruwer, and one of their Riesling Tröcken Grosses Gewächs bottlings.  Mine was the 2011 Eitelsbacher.  First things first . . . . 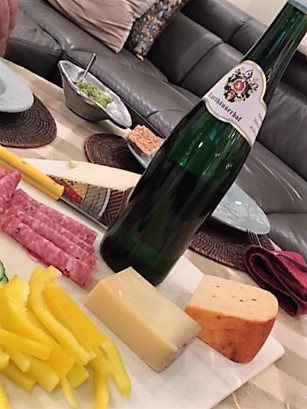 This wine is 100% Riesling, from 15-25 year-old vines, and was barrel-fermented then aged for one year in stainless steel tanks.  Alcohol by volume is 10 percent, with 41.5 grams/liter of residual sugar.  Now for the good stuff:

The wine is palest yellow-green, almost clear.  On the nose it’s all peaches, honey, and lemon zest, with the faintest hint of petrol.  A sip confirms the peach influence – ripe, juicy white peach – along with citrus, rocks, and a little bite of green apple.  There is also a whisper of effervescence, which is quite refreshing.  In my mind, it’s a perfect wine for the hot, humid weather of South Florida, where I’d be delighted to have a glass of it as an apéritif any day.  For that matter, if I were hibernating through a northern winter, I’d look forward to opening a bottle of this Riesling.  It’s liquid sunshine. 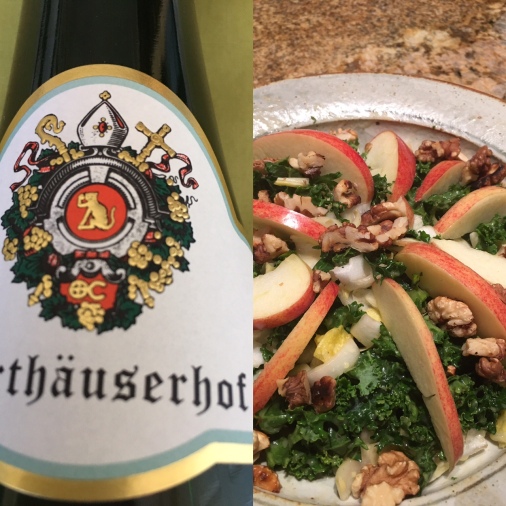 As far as pairings go, I tried this wine alongside a platter of charcuterie and cheese, and it was a perfect match.  On day two, I had it with a kale and endive salad topped with blue cheese, walnuts, and Honeycrisp apples – delish!  Heck, I’d probably enjoy a glass of this Ruwer Riesling with my breakfast.  It might BE my breakfast.

Another 100% Riesling, this wine is about as different from the first one as could be:  much more pigmented (light lemon yellow), with a rather austere nose.  I do pick up notes of lemon peel and even a little white pepper.  And there is something minerally, almost chalky, too.  On the palate, there are peaches and nectarines but they seem a little reluctant to reveal themselves.  I leave the glass for a while and retaste.  What a difference an hour makes!  Now there is a profusion of peach and nectarine swirling around with the citrus peel; and a long, long finish with almonds and wet stones.  It’s like a different wine!  Let my mistake be your lesson: don’t serve these wines straight out of the fridge; allow them time to warm up a bit, so they can unleash all their charm.

With only 7.4 grams/liter of residual sugar and 13% alcohol by volume, this is a much drier wine than the first.  For recent converts to Riesling or for those who fear they won’t enjoy a sweeter wine, this would be a great bridge to the wonders of the grape.  I sampled it with the aforementioned endive and kale salad – a nice match, but not as wonderful as the Ruwer – and then with fresh hogfish filet topped with a mélange of  vegetables.  This proved to be a much better collaboration. 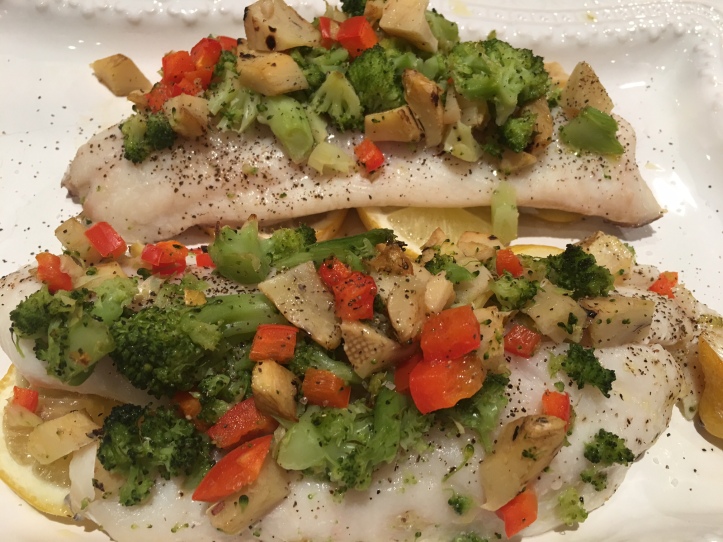 So, to go back to the idea that All Roads Lead to Riesling: I think it’s inevitable.  People who get to know the wines, try the different styles and sweetness levels, ultimately come to love them.  The challenge is to facilitate the initial meeting, whether at an Asian or Indian restaurant, where the cuisine provides the perfect complement to Riesling’s charms, or at a wine bar, courtesy of a knowledgeable bartender.  Those of us who already love the wine must act as its chief evangelists, encouraging our friends and family to expand their horizons.  Each one teach one!  Because, let’s face it, once you fall in love with Riesling, there’s no going back.